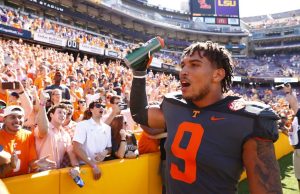 Josh Heupel and No. 3 Tennessee will welcome in UT Martin this Saturday afternoon to Neyland Stadium. Not only will the Vols be enjoying Homecoming this Saturday, but it will also be a game that Tennessee celebrates 50 years of Title IX on campus.

That being said, this should be a nice test for Tennessee’s defense and not allow too much complacency before a big game in Knoxville against Kentucky next weekend. It should also provide a good opportunity to allow some of Tennessee’s depth to find some time on the field against a successful offense.

Here’s what Tennessee head coach Josh Heupel has been saying about the Skyhawks during this week’s slate of press conferences.

“Obviously, offensively, you just look at the production that they’ve had and the ability to move the football (and) score points. It will be a great test for us on the defensive side of the football to go out and execute and play well. There are some things obviously that we’ve been focused on offensively. We’ll have to adjust to what we see at the beginning of the game and during the course of the game and have all 11 (players) execute at a really high level. There are some things that we’ve tried to clean up on special teams, and I want to see that improve too.”

On the importance of playing FCS schools…

“I do think it’s important. Just having been around the game, my dad at a small college to him being at an FCS school. These games support their football department but, in some ways, support their entire athletic department as it continues to trickle down. I think it is important that these games are played. I think it speaks to the healthiness of football on all levels. I think that’s really important that we balance all those things as we continue to move forward.”