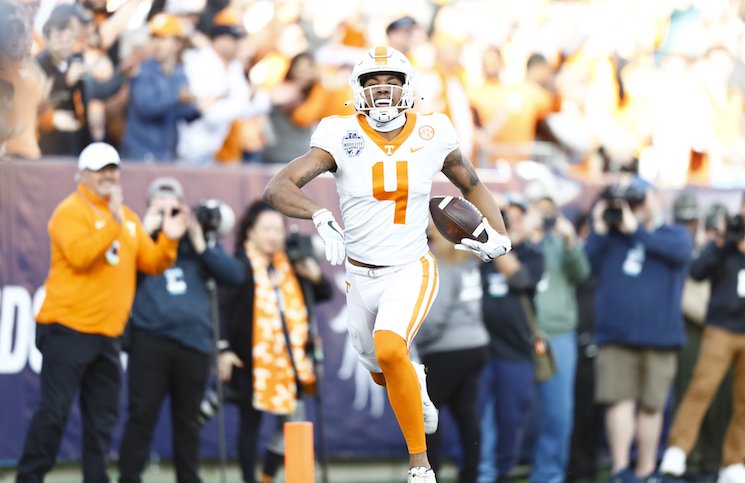 Cedric Tillman is back.

After missing Tennessee’s last four games with an ankle injury, the preseason All-SEC receiver announced he will play against Kentucky on his Instagram Friday.

“Great to be back! If I catch 2 touchdowns against Kentucky, everyone gets 2 free cookies after the game on MONDAY at both Moonshine Mountain stores in Knoxville,” Tillman said in the post.

Tillman’s status has been a major question over the last month since the receiver injured his ankle in the first half of Tennessee’s blowout win over Akron.

The senior receiver underwent tightrope ankle surgery following the Akron game and is finally healthy enough to suit up for the Vols.

More From RTI: Three Keys For Tennessee Against Kentucky

Tillman caught 17 passes for 246 yards and one touchdown in just over two games before suffering his ankle injury. The 6-foot-3, 215 pound receiver dominated in Tennessee’s win at Pitt, hauling in nine passes for 162 yards and the go-ahead touchdown in overtime.

How big Tillman’s role against No. 19 Kentucky will be is yet to be seen but the star receiver is back.

With Tillman sidelined, senior receiver Ramel Keyton stepped into a starting role and performed well. After totaling just 20 catches for 158 yards in his first three years in Knoxville, Keyton’s tallied 20 receptions for 357 yards and three touchdowns in Tillman’s absence.

While Keyton stepped up with Tillman sidelined, slot receiver Jalin Hyatt was the biggest beneficiary. Hyatt’s dominated defenses the last month, most notably his 207 yard, five touchdown performance against Alabama.

Kick off between Tennessee and Kentucky is at 7 p.m. ET Saturday night. Chris Fowler, Kirk Herbstreit and Holly Rowe are on the call for ESPN.