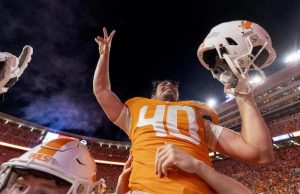 Tennessee has landed in the Top 4 of the initial 2022 College Football Playoff rankings. Photo By Andrew Ferguson/Tennessee Athletics.

The first official College Football Playoff rankings have been released on Tuesday night.

With an 8-0 record and the No. 2 AP poll ranking in the country, Josh Heupel and the Tennessee Volunteers are the No. 1 seed in the initial playoff rankings.

The rankings will be updated every Tuesday until the four teams are decided on following the regular season and conference tournaments. The rankings were announced on ESPN’s College Football Playoff Rankings show and included all 13 committee members set to make the decisions.

The initial College Football Playoff rankings are as follows:

On the outside looking in:

NUMBER ONE 🍊@Vol_Football reigns atop the first #CFBPlayoff rankings 💪 pic.twitter.com/HqBNTSTP9g

Tennessee has gotten to this spot in the season by winning, winning, and winning some more. The undefeated Vols have had five Top 25 matchups throughout the season and won all of them. In fact, in those five games (Pittsburgh, Florida, LSU, Alabama, Kentucky), Tennessee won by an average score of 16 points. That included a massive 27-point win over LSU on the road and a 38-point thrashing of Kentucky at home over the Halloween weekend.

Ultimately, though, these initial rankings are just a holdover until next Tuesday night. Those will be the real rankings.

Why? Because Tennessee and Georgia square off this weekend in Athens, with the winner possessing the best win in all of college football so far.

At the end of the day, these are the first of many rankings that will come out this season. And the teams still have a lot of football to be played. But the committee did show their belief in Tennessee’s team and resume on Tuesday night.

THE TOP 25 CFP RANKINGS HAVE ARRIVED‼️ @Vol_Football leads the pack at No. 1️⃣ pic.twitter.com/7lj5qo00d3