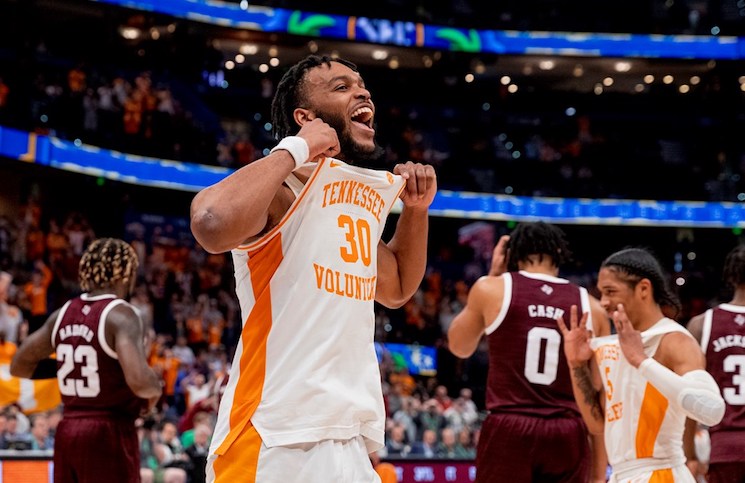 Tennessee forward Josiah-Jordan James has been limited all preseason while recovery from an offseason knee injury. James missed Tennessee’s exhibition win over Gonzaga and hasn’t been back at full speed with the regular season right around the corner.

So, will James be available for Tennessee’s season opener Monday against Tennessee Tech?

“We think so,” Tennessee head coach Rick Barnes said Thursday. “He’s going to do a little bit more today and it’s likely he’ll play. Now we just have to keep building him back up to get him ready.”

James is a preseason Second Team All-SEC selection according to both the media and league’s coaches after spurning the NBA Draft for a final collegiate season.

Even with strong offense, James’ greatest contribution is his defensive prowess and versatility. The need for better defense has been a talking point for Rick Barnes this preseason and the eighth-year head coach anticipates James’ returning helping the Vols’ team defense.

“Josiah has elite hands,” Barnes said. “He can get his hands on so many deflections. He’s terrific. His experience, there’s no doubt he helps us with that and he’s a fix it kind of guy. When things break down he, Santi and Zakai are really good fix it guys when things don’t go exactly the way you want it.”

Even without James, Tennessee’s impressed in the preseason including its 19-point exhibition win over No. 2 Gonzaga. With the senior forward returning to the lineup, Tennessee has a chance for a special season.

“I think we’re in a great place,” senior forward Olivier Nkamhoua said. “When Josiah comes back he’s going to be ready to go with us.”

Tennessee opens its 2022-23 season on Nov. 7 against Tennessee Tech. Tip-off from Thompson-Boling Arena is at 7 p.m. ET.