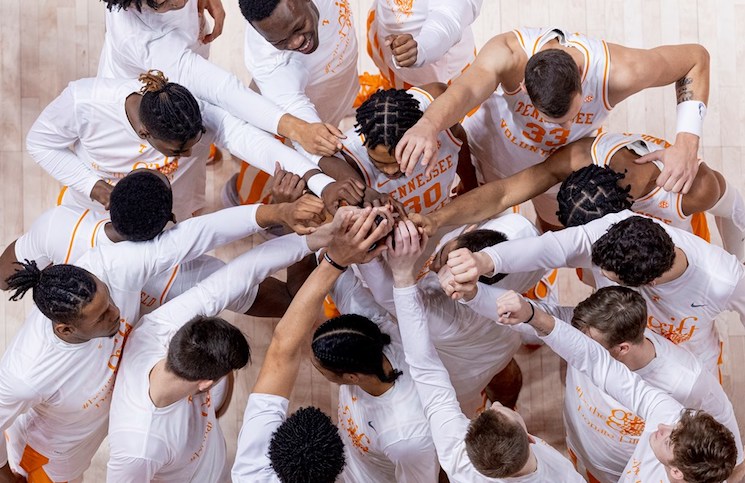 Expectations are high for the Vols after returning four starters and adding a pair of instant impact newcomers. The Vols went 27-8 (14-4 SEC) a season ago and was one of the best teams in the country the second half of the season.

With the dawn of a new season here, let’s take a look at Tennessee’s guards, wings, front court and schedule.

Sophomore point guard Zakai Zeigler is back after averaging 8.8 points, 2.7 assists and 1.7 steals as one the SEC’s biggest surprises as a freshman.

Zeigler came in with five-star freshman point guard Kennedy Chandler and with Chandler now in the NBA, it’s Zeigler’s time to run the Vols’ offense.

The 5-foot-9 point guard has looked even better this preseason, looking more comfortable playing around the big bodies in the paint and as a passer. The preseason Second Team All-SEC dished out eight assists with just one turnover in the Vols’ exhibition win over Gonzaga.

Tennessee’s lack of a backup point guard is perhaps its biggest roster flaw so there will be a lot of pressure on Zeigler this season.

The returning First Team All-SEC selection is the best three-point shooter in the conference after making 102 triples at a 40% clip a season ago.

The lefty’s game made a major jump a season ago when he moved off the ball showing a knack to move without the ball offensively while continuing his improvement as a defender.

Vescovi spurned professional basketball for one more year at Tennessee, noting his need to improve with the ball in his hands.

The Indiana State transfer brings experience and a strong scoring ability to Tennessee. The Celina, Tennessee native played four seasons at Indiana State, averaging over 15 points per game in the final three.

Key missed the entire 2021-22 season with a shoulder surgery that limited his shooting production his final two seasons in Terre Haute. Key said the shoulder was as healthy as it had been in college this preseason.

The health is showing itself. Key scored 26 points on four-of-seven shooting from three-point range in the Vols’ exhibition win over the Zags.

Expect Key to be Tennessee’s backup point guard to start the season in addition to playing major minutes off the ball.

The freshman was battle tested by going head-to-head with Zeigler his first summer at Tennessee while Vescovi played with his international team.

The 6-foot-3 guard has some physicality and solid feel but his shooting touch and understanding of Tennessee’s offense— expected for a freshman point guard— gives him room to grow.

Edwards has the potential to become a role player as a freshman but he’ll have to earn that right early in the season.

Another preseason All-SEC selection, James is back for his final collegiate season. The 6-foot-6 wing was limited in the preseason while recovering from an offseason knee surgery but is “likely” to play in the season opener.

It starts on the defensive end for the left-handed senior. James is the glue of Tennessee’s elite defense with the versatility to defend both guards and big men. That versatility allows Tennessee to play its effective small ball lineup.

James turned the corner offensively the second half of last season. If James can repeat the offensive success then he’ll earn himself a lot of money in his senior season.

The five-star freshman is the one for sure instant impact freshman on Tennessee’s roster. At 6-foot-8 Phillips has the size of a big man but the skills of a guard.

Phillips has no back-to-the-basket scoring game but is a talented three-point shooter and can finish with either hand at the basket.

With a crazy wing span, Phillips looks like an NBA player. That length gives Phillips the versatility to defend guards and big men like James. Whether he’ll be proficient enough defensively is to be determined.

Expect Phillips to come off the bench — if James is healthy — and play major minutes this season.

Mashack could easily be in the guard territory but with his defensive prowess and physical, 6-foot-4 frame allows him to play on the wing.

As a freshman a season ago, Mashack played sparingly as a defensive boost but was offensively challenged.

Rick Barnes called Mashack Tennessee’s most improved player earlier this preseason and it’s shown up during open practices. Mashack has improved his shot offensively both in the midrange and from three-point range.

Still, it’s a tough path to playing time in a loaded guard and wing room. It will be fascinating to see how Mashack’s role evolves over the course of the season.

Unlikely To Have A Major Role

The four-star freshman is facing the same problem Mashack is facing in a crowded wing room. Unlike Mashack, Jefferson doesn’t have a year in the system to develop and adjust to playing for Barnes.

The left handed wing will have some opportunities early in the season but earning a major role is unlikely.

The 7-foot-1 center looked overmatched in his first season after transferring from Arizona State to Tennessee but Plavsic has made steady improvements year-by-year and was a reliable role player for the Vols a season ago.

Plavsic averaged 4.2 points and four rebounds in 14 minutes a season ago and always knew his role. Physicality, rebounding and a little bit of an instigator, Plavsic was a major piece on last season’s 27 win team.

The big man’s improved again this offseason boasting a more complete offensive game. Against Gonzaga, Plavsic was a perfect six-of-six from the field and also had some great passes.

Nkamhoua missed the last six weeks of the 2022-23 season due to injury as he was starting to turn a corner.

In his first season with a major role, Nkamhoua averaged 8.6 points and 5.6 rebounds per game. Consistency was the question for Nkamhoua a season ago and will be this season.

The 6-foot-9 forward has a strong jump shot and is one of Tennessee’s best rim protectors.

When Nkamhoua went down with an injury, it opened up a role for freshman Jonas Aidoo. Aidoo was raw as a freshman but showed major flashes especially against National Player of the Year Oscar Tschiebwe and All-SEC center Walker Kessler.

At 6-foot-11, Aidoo is a great athlete and is Tennessee’s best rim protector— not just with his ability to block shots but his ability to affect them.

Aidoo’s strength and finishing ability around the rim is a work in progress but he has a strong three-point shot and Barnes has given him the green light this season.

Aidoo has the highest ceiling of any Tennessee big man and his development as a sophomore seeing minutes every night will be fascinating.

The final member of Tennessee’s signing class is perhaps already the strongest player on Tennessee’s team as a freshman. However, Awaka is very raw and isn’t ready for a major role just yet.

Fortunately, James and Phillips versatility will allow Tennessee to get away with playing just three big men for most of the season.

Still, Awaka will have opportunities early in the season and could carve out a small role as a freshman.

The Vols face Colorado in Nashville, Butler, BYU or USC and one other opponent in the Battle4Atlantis, Maryland in Brooklyn, Arizona in Tucson and Texas in Knoxville.

The final game in the Battle4Atlantis, Arizona and Texas will be the major tests of that group.

I could easily see Tennessee going 12-1 in the non conference slate but I feel like 11-2 is the most likely result.

In conference play, Tennessee plays Kentucky, Auburn, South Carolina, Mississippi State and Vanderbilt twice and the rest of the conference once.

That’s good for a 15-3 conference record and would give Tennessee a strong chance to win its second SEC regular season title of the Barnes era.

I’m not going to attempt to project the NCAA Tournament without knowing the potential matchups.