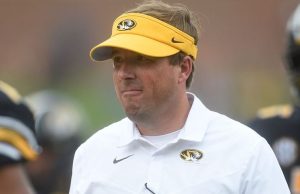 Missouri head coach Eli Drinkwitz is well aware of the challenging task at hand this weekend for his Tigers.

AP No. 5 Tennessee is eagerly waiting to get back on the field after suffering their first loss of the season next weekend. And it will be Drinkwitz and the Tigers that the Vols will be hosting.

In last year’s matchup in Columbia, Tennessee bounced Missouri out of their own stadium with a 62-24 beatdown. The Vols’ run game was firing on all cylinders, racking up a whopping 458 rushing yards in the game.

Former Tennessee back Tiyon Evans ran for 156 yards and three touchdowns, while Hendon Hooker added 80 yards and Len’Neth Whitehead dropped in another 76 yards on top of that.

Drinkwitz says that he has plenty of learning moments and takeaways from that game, however, nothing that he cares to share during game week.

“A whole list of things,” Drinkwitz said about what he learned from the 2021 matchup via KMIZ ABC 17. “I’m not sharing them with you. Maybe after the game. But there’s a whole list of things that you look back on and you say ‘Okay, I have to do this a lot better on both sides of the ball.’ I think we’ve attacked that on one side of the ball and made a lot of improvements in that case.”

More from RTI: By the Numbers: Missouri @ Tennessee

Drinkwitz knows that part of Tennessee’s prowess is the experience that they have, in particular, on the defensive side of the ball.

While he isn’t too keen on revealing his game plan, Drinkwitz certainly is in need of a good path forward this week. LSU head coach Brian Kelly began his Tennessee-week Monday presser explaining what Tennessee was and wasn’t going to do, which didn’t necessarily turn out to be the case. The Vols won that game by a score of 40-13 in Death Valley.

AP No. 5 Tennessee will host Missouri in the final home game of the 2022 season this Saturday at noon ET.