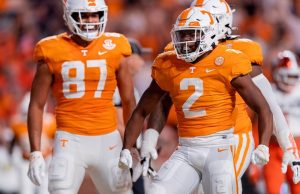 Tennessee running back Jabari Small had his afternoon cut short against Georgia last Saturday after an injury took him to the medical tent in the first half of play.

Small finished the game with just three rushing attempts for eight yards and was taken out early in the game.

The good news for Tennessee, though, is that whatever was going on Saturday seemingly hasn’t been a worry this week.

According to head coach Josh Heupel, Small has been good to go and is practicing with the team.

“Jabari has been with us all week,” Heupel said on Thursday. “He’ll be ready to go.”

Small has racked up 483 yards on 113 carries this season, also adding in eight touchdowns on the ground. In addition, the junior running back also has 93 yards and two touchdowns on 11 receptions out of the backfield. The Vols have done a good job at balancing the running back room as both Jabari Small and Jaylen Wright have 113 rushing attempts each.

“To ask a guy to slow down his mental, ask a guy to slow down his footwork some, to make sure he can’t understand if you don’t slow down, you’re not going to allow those linemen to get the second level,” Tennessee running back coach Jerry Mack said in October. “They’re not going to be able to deliver those blocks for us. That’s extremely hard. Jabari [Small] has a lot of experience, playing running back for a very long time with his high school and college. He’s been able to see a lot of different looks. Now, he has a better feel. He really feels bodies well around him.”

No. 5 Tennessee will host Missouri in the final home game of the season coming up this Saturday afternoon at noon ET.