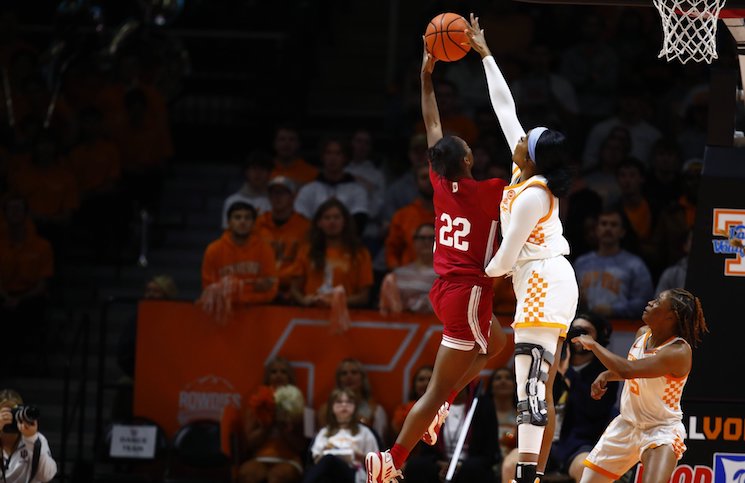 The Lady Vols led 10-9 midway through the first quarter before Indiana used an 11-0 run to open up a double-digit lead. The Hoosiers never looked back, leading for the game’s final 34 minutes.

“They punched us in the mouth,” Tennessee coach Kellie Harper said. “I would have liked to see a better response on our end but I didn’t see it. I think the biggest area of growth for us is just our overall toughness.”

Tennessee’s uncharacteristic issue was its struggles on the glass. Always an emphasis and usually a strength for Harper coach teams, rebounding proved a weakness against Indiana.

“In the first half they out toughed us,” Jasmine Powell said.

Tennessee improved dramatically on the glass in the second half to even out the final rebounding numbers but the first half issues dug the Lady Vols into a hole.

“This is not anything new. I’ve been saying this all fall— that we look different on the boards,” Harper said. “We’re not doing anything differently. We’re still practicing that so it is right now a mentality, an attitude, a mindset.”

Despite a strong perimeter shooting night from Tennessee (nine-of-24) including three triples from Tess Darby and Jasmine Powell. The Lady Vols found some good looks at the basket but not consistent enough to keep up with the Hoosiers

When Tennessee did score in spurts — including back-t0-back Tess Darby threes in the third quarter — the Hoosiers always seemed to find an answer.

The biggest push came early in the fourth quarter when Tennessee pulled within four points — the closest the game got after the Hoosiers’ early 11-0 run. Indiana answered with a 10-2 run that pushed its lead back to double digit. The Lady Vols never pulled back within 10.

“I think it was our transition defense,” Powell said. “I think offensively we took a couple quick shots and we weren’t able to get back. I think it hurt us quite a bit. We kind of broke down defensively in a sense.”

The Lady Vols return to the court Saturday against Rutgers. The matchup against the Scarlett Knights is Tennessee’s first of three games at the Battle4Atlantis tournament and continues the Lady Vols’ challenging non conference schedule.

“It’s about finding a way to make a successful play,” Harper said. “There’s a loose ball and I didn’t see two players on the floor. That’s an improvement from our last game so I think there’s some little things we have to make sure we’re praising and some things we have to absolutely hold our team to a higher standard.