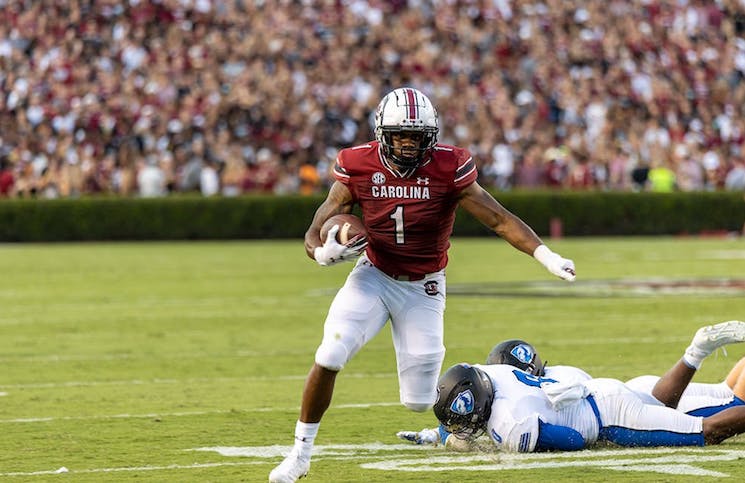 South Carolina star running back Marshawn Lloyd is out for Saturday night’s showdown between the Vols and Gamecocks at Williams-Brice Stadium.

Lloyd is the top threat in a limited South Carolina offense, rushing for 556 yards and nine touchdowns on 100 carries this season. The former five-star recruit has been the bell cow in South Carolina’s offense this season before missing the Gamecocks last two games with the same injury that second year South Carolina coach Shane Beamer said would sideline him against the Vols.

The physical Lloyd isn’t the only running back South Carolina will be without against Tennessee. One of Lloyd’s top two back ups Chrisitan Beal-Smith will also be unavailable against the Vols.

“We’ll see where they are next week,” Beamer said. “But right now they don’t feel like they’re capable of playing up to their ability on Saturday.”

Beal-Smith’s rushed for 146 yards and five touchdowns on the season before missing last week’s game against Florida.

More From RTI: Three Keys For Tennessee At South Carolina

Lloyd and Beal-Smith have combined for 16 of the Gamecocks 33 offensive touchdowns this season and are each major losses entering the SEC east matchup.

Without Lloyd and Beal-Smith, the Gamecocks will turn to Juju McDowell and potentially Jaheim Bell in the backfield. McDowell is Lloyd’s main back up and is second on the team in carries. However, the sophomore running back has tallied just 59 yards on the ground with Lloyd sidelined the last two weeks.

Bell is a tight end that South Carolina used as a ball carrier. The 6-foot-3 junior’s totaled 150 rushing yards on 47 carries to go along with his 18 catches for 190 receiving yards this season.

Both McDowell and Bell will see additional action in the Gamecocks’ razor thin running back room.

Kick off between Tennessee and South Carolina is set for 7 p.m. ET. Chris Fowler, Kirk Herbstreit and Holly Rowe are on the call for ESPN.