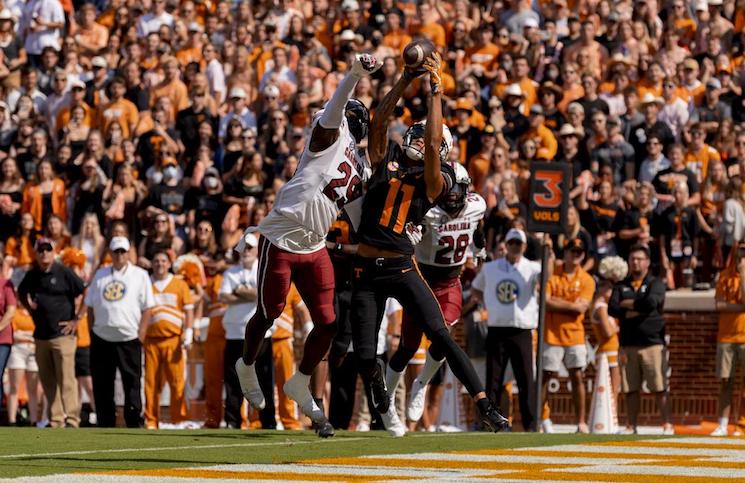 Tennessee begins its two-game road stretch to end the regular season Saturday at South Carolina. The Vols are looking to pick up their 10th win of the season and their fourth straight victory over the Gamecocks.

South Carolina is 6-4 (3-4 SEC) and is not playing itss best football in November. Missouri easily handled the Gamecocks three weeks ago in Columbia before South Carolina earned a narrow win over Vanderbilt and Florida blew out the Gamecocks.

Josh Heupel and Shane Beamer split the Steve Spurrier First Year Coach award last season. Heupel can improve to 2-0 against his counterpart and continue to further his program ahead of its SEC east foe.

Two weeks ago, the Sanford Stadium crowd had a major affect on Tennessee’s offense in Athens. Williams-Brice Stadium won’t be as loud as Sanford was but it’s another sell out in Columbia and the night game combined with the Gamecocks chance to ruin Tennessee’s season will make for a rowdy crowd.

Tennessee’s struggles with the crowd at Georgia makes it something to watch this week. Josh Heupel said Thursday that Tennessee won’t do anything crazy different to deal with the noise and simply must execute better.

The best way to take the crowd out of the game is starting fast. South Carolina fans, rightfully, are not expecting an upset. Tennessee taking a two touchdown lead in the first quarter would prove them right and damped the mood in the stadium.

South Carolina is far from a team built to play from behind. The Gamecocks have won of the worst passing offenses in the SEC and quarterback Spencer Rattler has thrown just nine touchdowns to go with eight interceptions this season.

Tennessee’s pass defense has been suspect this season but they’ve been at its best while playing with a lead against an offense that’s become one dimensional. That’s a combination for Tennessee to feast on Rattler like they feasted on Kentucky’s Will Levis.

If Tennessee starts fast, South Carolina is going to have a very tough time climbing back into the game.

Break Even In Special Teams

South Carolina is not a good football team. However, they are an elite special teams unit. Shane Beamer has taken after his dad and made “Beamer Ball” — strong special teams and defense — a staple of his program.

The Gamecocks have returned two punts for touchdowns this season and another kick for a touchdown. South Carolina has converted three fake punts this season including one for a 48-yard touchdown last week.

If South Carolina finds a way to stay in this game into the second half it will be because it makes special teams plays. Last season, South Carolina’s best play against Tennessee was a fake punt that set up a second half touchdown. Discussing the play this week, Josh Heupel said a player “took the play off.” The Vols need to avoid mistakes like that this season.

There’s no reason to think Tennessee can’t break even in special teams. The Vols have been a good special teams unit all season with the blocked punt against Pitt and Dee Williams not fielding a punt against Georgia have been the lone major mistakes.

Tennessee has also invited teams to return kicks this season, kicking high and short and letting its kick coverage unit go make plays. It’ll be interesting to see if they continue that strategy against a good return unit. I expect they still will and will execute at a high level.

Win The Turnover Battle By Two Or More

Consider this final key the “Tennessee embarrasses South Carolina” key. Tennessee doesn’t need to win the turnover margin by two to win this game but if they do it’ll assuredly be another lopsided win for the Vols.

There’s plenty of reasons to believe Tennessee can dominate the turnover battle against the Gamecocks.

We know Hendon Hooker does an elite job of protecting the ball, firing just two interceptions on the season and just five in his 22 games playing for Tennessee. If the Vols don’t cough up the football — not a given — they’re unlikely to turn it over.

On the other side, South Carolina has turned it over more than any other team in the SEC this season. Tennessee’s defense ranks second in the conference in turnovers faced. The Vols’ defense has their flaws but they’ve been opportunistic all season long.

As explained in section one, Rattler and the Gamecocks playing from behind is a recipe for mistakes and turnovers. Fast start or not, Tennessee’s offense is going to score points. If the Gamecocks make mistakes while pressing then this one could get ugly.