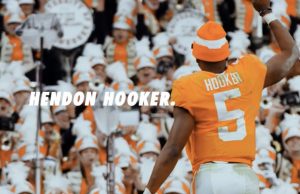 The injury to Hendon Hooker and the subsequent news that his season is over has been one of the most talked about topics this week in the sports world.

Since the announcement was made on Sunday afternoon, several media personalities and companies have posted videos or kind words to honor the Tennessee quarterback.

On Wednesday evening, Tennessee officially dropped its own tribute video to Hooker.

The video documents the Tennessee quarterback’s rise to prominence from the view of the lens, cutting in with audio from Hooker’s teammates and coaches.

No. 10 Tennessee and starting quarterback Joe Milton III will take on Vanderbilt in Nashville this Saturday night.

Here’s a look at some of the other tributes and reactions from around the sports social media world this week:

A special player and person.
One of the @Vol_Football greats.

🙏 up for a speedy recovery pic.twitter.com/rUB70gcMX0

This is the type of joy Hendon Hooker brought Tennessee fans. Legend pic.twitter.com/O9Lbwr3Lib

Don’t care who you root for. That’s heartbreaking to see @henhook2 gingerly walking to the locker room. That kid is everything that’s right about college sports.

Hendon Hooker always did right by Tennessee…committed to the program and stayed through the coaching change, lost a quarterback battle then eventually played his way to QB1, and led them on one heck of a ride this season.

No one deserves injury. But especially him.

Not that anyone should be surprised, but @henhook2 was at practice, crutches and all, today and yesterday to support his @Vol_Football teammates. He's kept a strong presence in the football building after getting the tough news Sunday that he was out with a torn ACL. #leader

we love you, brother!! @henhook2

674 days after committing to Tennessee with a picture of Neyland Stadium, Hendon Hooker leads Tennessee to an undefeated home record in 2022.

Larger than life was a fitting prediction https://t.co/m66moa1Nk8