Tennessee basketball bullied and bludgeoned Georgia’s offense for the final 30 minutes of the Vols’ win over Georgia Wednesday night.

In other words, it was just another night for Tennessee basketball. After an average opening 10 minutes, the Vols stepped on the gas and outlasted Georgia, 70-41.

Tennessee led 19-17 10 minutes into its midweek bout with Georgia. Then the Vols did what they do best, completely taking Georgia’s offense out of rhythm to open up a sizable halftime lead.

Georgia’s Terry Roberts made a tough runner as the first half clock ran out. It was just Georgia’s second field goal and fifth point scored in the final 10:49 of the half.

“Just having the right mindset playing defense as a team, not individually,” freshman Tobe Awaka said of the defensive success. “Understanding that it’s going to take the whole unit to sort of control that and just playing defense how we play it, with an aggressive mindset.”

Tennessee’s offense wasn’t at its best over the stretch, but they played well enough to easily build a double digit halftime lead. The Vols were particularly effective scoring inside as Olivier Nkamhoua and Uros Plavsic combined for six points over the stretch, mostly on open shots at the rim.

The final result was an extended, 16-5, Tennessee run to end the first half that gave the Vols a comfortable 13-point lead at the intermission.

More From RTI: Tennessee Basketball One Of Nation’s Best At Going On Runs

Tennessee dominated the turnover margin in its 21-point win at LSU Saturday. The Vols did it again against an overwhelmed Georgia backcourt Wednesday night.

Georgia turned the ball over 20 times compared to just nine Volunteer turnovers. Just like they did in Baton Rouge, Tennessee was elite turning Georgia miscues into points on the other end. The Vols scored 25 points off of the Bulldogs turnovers while Georgia just totaled four points off of Tennessee’s turnovers.

While a handful of Georgia’s turnovers were unforced and sloppy, most came from Zakai Zeigler and Santiago Vescovi strangling the Bulldogs’ backcourt.

Vescovi outpaced his sophomore counterpart with five steals to Zeigler’s four. Both completely took Georgia out of what it wanted to do offensively and led to a lopsided Vols’ win.

“Santi, he does it night in and night out,” Barnes said. “He was not feeling well at LSU, really. Josiah told me he told him before the game you’re going to have to help me, I’m not going to be able to do anything but lock in on the defensive end. … I think he goes into a game thinking on what he has to do to help his team win and he starts on the defensive end. And he’s done a great job all year. He is truly the guy that, you think about it, four years ago everybody went after him. Now he’s a guy that does so much on the defensive end for us.”

Georgia point guard Terry Roberts took the brunt of the defensive attack, coughing the ball up five times while making just 33% of his shots and scoring 4.9 less points than his season average.

On another balanced scoring night, Tennessee turned to its interior scoring. The Vols attacked the basket and got to the free throw line on their way to the victory.

Tennessee took 29 shots at the basket and despite missing a handful of shots the Vols like taking in the second half, the Vols made 13 of those shots.

The shots came from different sources. Certainly, Tennessee’s frontcourt of Olivier Nkamhoua, Uros Plavsic, Jonas Aidoo and Tobe Awaka took the majority of the shots at the basket they weren’t the only ones.

Zeigler and Julian Phillips both attacked the basket often and tallied points there.

“I would just say how unselfish we are as a unit because I feel like no matter what game it is, everybody goes into the game thinking, ‘what can I do to win’ and not ‘what can I do to score 20 points.’ Tonight was the perfect night to show that,” point guard Zakai Zeigler said of the balanced offensive showing. “I didn’t even know that I had 11 points or whatever it was I had. I don’t think anybody in the locker room knows how many points they scored or how many shots they took. It just showed the unselfishness of this team.”

Tennessee was also strong getting to the free throw line, attempting 19 shots from the charity stripe. The Vols thrived at getting to the line earlier in the season but haven’t as much recently. The 19 attempts were the third most in a conference game this season.

The Vols weren’t overly effective shooting at the line, making just 12 attempts and missing both free throws in three different second half trips to the line.

Still, Tennessee’s ability to create points and get to the free throw line on a night shots weren’t falling is a strong sign. 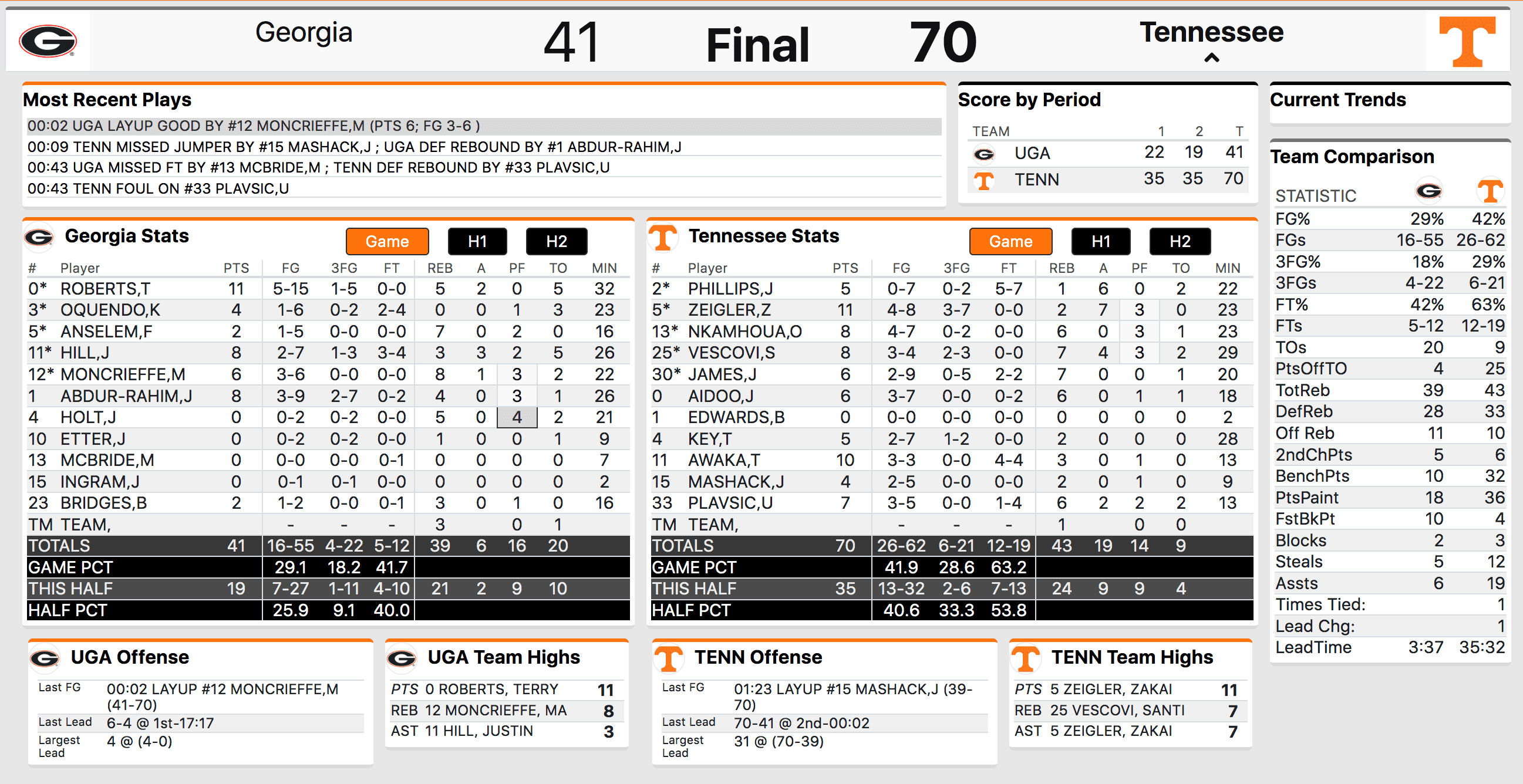 Tennessee’s attention turns to Texas and the Big 12/SEC Challenge as the Vols welcome the Longhorns to Thompson-Boling Arena Saturday. ESPN and College Gameday are coming to Knoxville for the top 10 tilt.