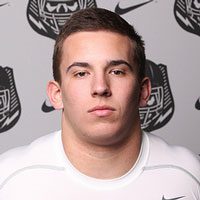 Status
Andrew Butcher, whose father played for Clemson (where he won a national championship), attends the same high school as current Vol quarterback Joshua Dobbs. He committed to Tennessee on June 8th (2013) after visiting Rocky Top multiple times and has taken over a half dozen trips to Knoxville since his commitment. After his decision to play for the Vols he received offers from Stanford, Alabama, Miami, Notre Dame, and several other power programs. Butcher was the fourth player to commit to Tennessee in the 2015 class.

Butcher possesses a solid frame with above average bulk, though he has room to add more in college. He gets upfield quickly and is a disruptive force behind the line of scrimmage. A high-effort prospect, Butcher is the type of player Butch Jones loves. He’s talented yet also works hard to maximize that talent. He’s disciplined against the run and demonstrates a quick first step when rushing the passer. Butcher also has the ability to use his strength to beat linemen to the inside. Tennessee needs more playmakers along the defensive front and Butcher will get a chance to prove he can fill that role early in his career.