Where SEC Basketball Stands in Rankings as Conference Play Nears

It’s almost conference play time in basketball season now that the calendar year is drawing to a close. Through nearly two months of the 2022-2023 season, several SEC teams have played at a high level, with six southeastern squads cracking the latest edition of the AP Top 25 poll. Tennessee leads the group, coming in […]

After a terrific Thanksgiving week showing in The Bahamas for the Battle 4 Atlantis, the Tennessee basketball team is on the rise in the latest Top 25 AP Poll. Tennessee swept its way through the three-day tournament with three big wins, all impressive for different reasons. The Vols began by shutting the door on Butler […] 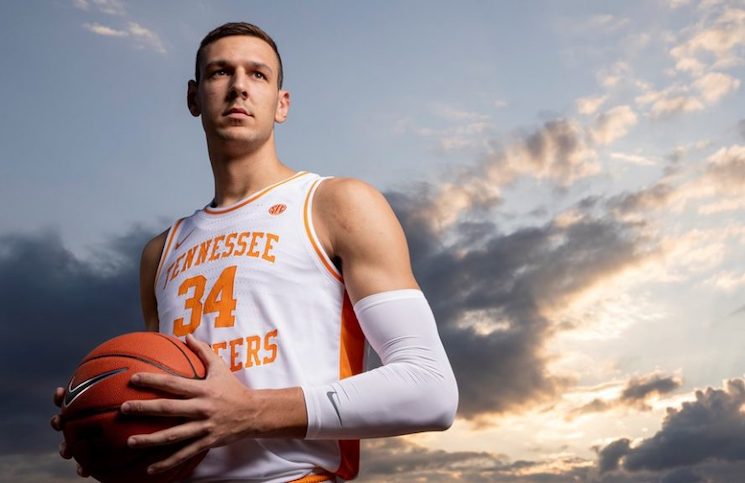 Tennessee center Uros Plavsic is set to return to the court for the Battle 4 Atlantis starting on Wednesday after missing the last game against Florida Gulf Coast, as announced by head coach Rick Barnes on Tuesday. Plavsic turned his ankle during the first half of Tennessee’s Nov. 13 game against Colorado in Nashville. The […]

Tennessee basketball open play at the Battle 4 Atlantis Tournament Wednesday night at 7:30 p.m. ET.  The three games in three days gives Tennessee an early season opportunity to add quality wins to its resume. The premier early season tournament also gives Tennessee a chance to get the poor taste out of its mouth from […]

Tennessee men’s basketball’s non conference schedule is starting to take shape. The Vols will battle Butler in its opening game at the 2022 Battle 4 Atlantis Tournament. Tennessee and Butler will matchup for the first time since the 2015-16 season on Nov. 23 at 7 p.m. ET. ESPN2 will broadcast the game. The Vols-Bulldogs contest […]

Tennessee basketball will be one of eight teams participating in the 2023 Maui Invitational, the program announced Tuesday. It’s the Vols’ fourth ever time in the storied Maui Invitational and the second time in the Rick Barnes era. Tennessee finished in seventh place in 2016 losing close games against Wisconsin and Oregon before beating Chaminade. The […]

The Vols finished in 3rd place in the Battle 4 Atlantis Tournament with a 67-58 victory over N.C. State.

The Vols passed their first test of the basketball season as they defeated No. 18 Purdue 78-75 in overtime in the Battle 4 Atlantis Tournament.