Notable SEC Underclassmen That Have Declared for the NFL Draft

With the end of January rapidly approaching, more and more news regarding the 2023 NFL Draft will be coming out in the next few months. Friday was the first day that the NFL announced the early-entry draft pool. According to CBS Sports, “more than 100 players have announced intentions to skip their remaining seasons and […]

Where the SEC Lands in Week Nine Basketball Rankings

The Jan. 3 edition of the AP Top 25 College Basketball Poll was officially released earlier this week with five Southeastern Conference teams making the cut. Alabama has jumped over Tennessee in the Top 10 as the Crimson Tide leads the conference with the No. 7 ranking in the country. The Vols, on the other […]

The latest comments from SEC commissioner Greg Sankey suggest sweeping changes to the conference that are sure to stir conversation. According to a report from CBS Sports radio host Marc Ryan, “SEC Commissioner Greg Sankey says the league is looking at going to a single division, and is leaning heavily in that direction. Moving away […]

All but two of the 14 SEC basketball programs hit the court on Monday night to open their 2022-2023 basketball seasons at home. The SEC’s five ranked teams all found strong wins on Monday night. Vanderbilt was the only SEC team to lose their opening game but also had the stiffest competition as well. The […]

Where the SEC Stands in Week 10 Playoff and AP Rankings

As the new No. 1 team in the nation, the Tennessee Volunteers are the talk of the football world here on Wednesday morning. ESPN’s College Football Playoff Rankings show on Tuesday night revealed the Vols as the initial No. 1 seed in the playoff rankings with Ohio State, Georgia, and Clemson in order behind them. […] 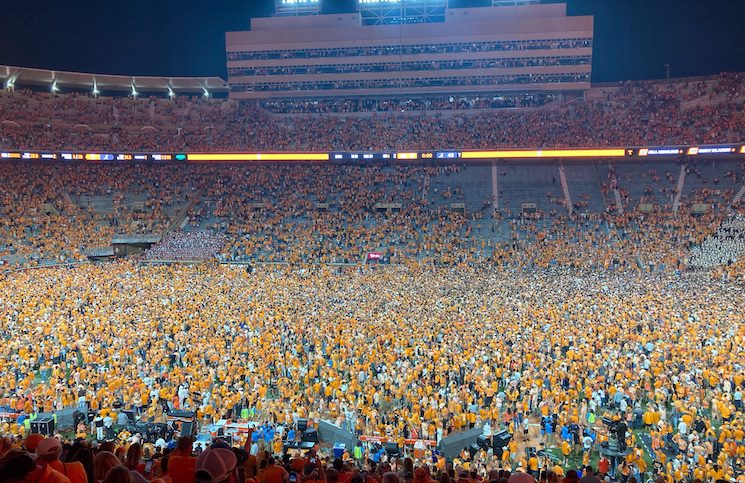 SEC officials have officially released the fine that Tennessee will be receiving for allowing fans to storm the field on Saturday night after defeating Alabama. According to an SEC press release on Sunday, Tennessee will be hit with a $100,000 fine for the actions. The fine for a first offense is only $50,000. However, this […]

Where the SEC Stands in Week Seven Rankings

There are six ranked teams representing the SEC in the week seven AP Top 25 poll. After LSU’s loss to Tennessee over the weekend, the Tigers have fallen out of the poll, making them the only SEC to move in or out this weekend. Otherwise, the other six still remain, with a little bit of […]

Where the SEC Stands in Week Four AP Rankings

The SEC began the 2022 college football season with six teams ranked in the AP poll: Alabama, Georgia, Texas A&M, Arkansas, Ole Miss, and Kentucky. Tennessee and Florida would enter the Top 25 in week two, bringing the SEC’s total of ranked teams to eight. The same eight were included in the week three rankings, […]

With a perfect 7-0 record on the weekend, the SEC East has officially locked down a collective undefeated start to the 2022 college football season. And if LSU can open the season with a win over Florida State in New Orleans on Sunday night, the same will be true about the SEC as a whole. […]