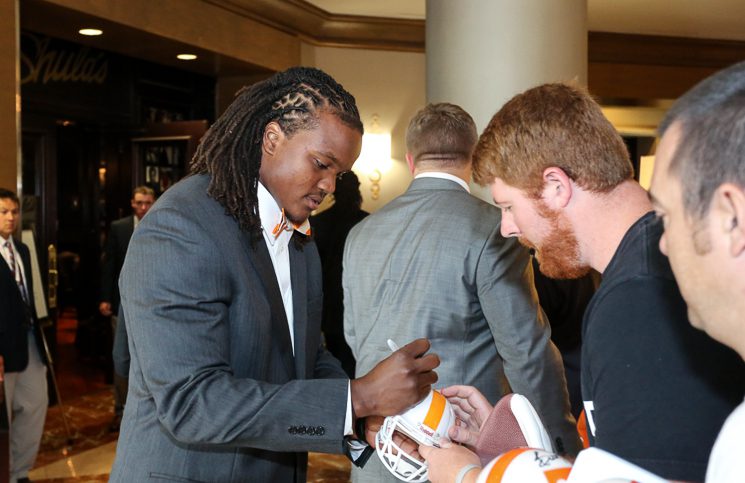 HOOVER, Ala. – The last time Curt Maggitt participated in a competitive football game, November 10th, 2012, he turned in his best performance of the season. He played so well, in fact, that he almost single-handedly overcame then-Vol defensive coordinator Sal Sunseri’s ineptitude. The Vols used him as a spy on dynamic Tiger QB James Franklin that afternoon, and despite multiple injuries, Maggitt flew around the field, disrupting Missouri’s offense on the way to a 21-7 halftime advantage.

With Tennessee holding a tenuous seven-point lead in the fourth quarter, his season (and the next) came to a halt when his ACL gave out as he pursued a scrambling Franklin. He had been battling turf toe and a shoulder injury all year but he played through the pain. He couldn’t play through this. The Vol defense collapsed after his exit, surrendering a game-tying touchdown with 47 seconds left before losing 51-48 in overtime.

His numbers that day? Five tackles, 1.5 tackles for loss, 1 pass defended and 3 QB hurries. For context, his three QB hurries in that game alone would have ranked third on the team last year. For the entire season. (Corey Miller led the way with five.) Something else about his performance stood out: he played nearly the entire game close to the line of scrimmage, something he hadn’t done all season.

He also spoke about playing close to the line more this year. “I feel like me being down there, with my energy, and the way I play…I’m a little reckless. I think we’ll get pressure on the quarterback and help the secondary out.”

Tennessee finished last in the SEC in sacks the last two seasons, so that should be music to  the ears of Vol fans everywhere. Especially since Maggitt, who made such a big impact while playing through multiple injuries two years ago, is finally healthy.

I asked him about how long it’s been since he was this healthy, “Woo. Man. That’s a good question. Probably high school. I haven’t felt this good since high school.” He also went on to say he feels “100% comfortable” with his new and expanded role and that he feels it fits his relatively broad abilities.

When I asked him about how he differs from the player we saw in 2012, he said, “I’ll be smarter. Smarter about the game…I’m still gonna go hard. I’ll go hard every play. Every play I’m on the field I’ll give my all.

“I’m just ready to get back to it….If we play to our ability, we’ll play very well. We’ll shock a lot of people.”

One thing is certain, Vols fans shouldn’t be shocked when a healthy Maggitt wreaks havoc on opponents this fall.