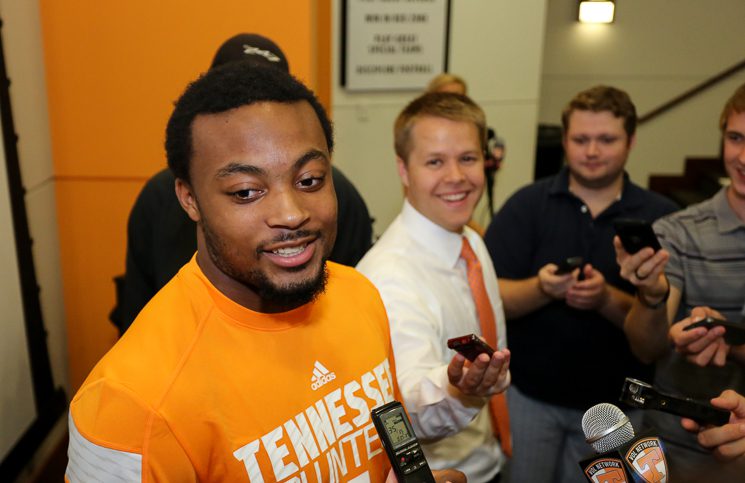 HOOVER, Ala. – Butch Jones said Tuesday, “People make the place, and we have great people at the University of Tennessee.” A common hashtag used by fans and coaches alike on Twitter is #VolFamily. Since the day he was hired he has spoke of the importance of the family atmosphere at Tennessee when it comes to recruiting and building a program.

Never has there been a more relevant use of the word ‘family’ in the history of Tennessee football.

“I think the thing where we’ve been aided and benefited from is we have six legacy players whose fathers played at the University of Tennessee and were great players,” said Jones at SEC Media Days. “We want individuals that have grown up understanding the rivalry with Alabama, with Florida, understanding the traditions that we have at the University of Tennessee. So the legacy players have helped.”

Tennessee signed six legacy players in the 2014 class. Dillon Bates, Evan and Elliot Berry, Neiko Creamer, Todd Kelly Jr. and Vic Wharton all followed in the footsteps of family members and elected to play for Tennessee (Kahlil McKenzie and Cecil Cherry have followed suit in the 2015 class). This amazing fortune in former Vol procreation has left Butch Jones reaping the benefits; not only because these players willing to come to Tennessee, but because they’re also really, really good. I would be willing to say that in the history of college football no two-year span of recruiting for a single school has featured so many legacy players – and certainly not ones that were as highly touted as this group. It just doesn’t happen in this capacity.

Butch Jones wasted no time in putting this good fortune to work. He knows the type of impact that talented players with the right attitudes can have on the future of a program, so the second-year coach is using these legacies to help build and mold his team.

We have heard Butch talk before about the importance of players recruiting and coaching other players, and who better to accomplish those tasks than players who grew up with ties to the program – players who watched their fathers, brothers or uncles succeed wearing orange? There are none.

Legacy players aren’t a cure-all. Tennessee isn’t suddenly guaranteed to immediately rise to national prominence thanks to the well-timed offspring of some former players. But when this many join together over such a short time frame – and just so happen to be among the most talented players in the country – it can certainly speed up the process.