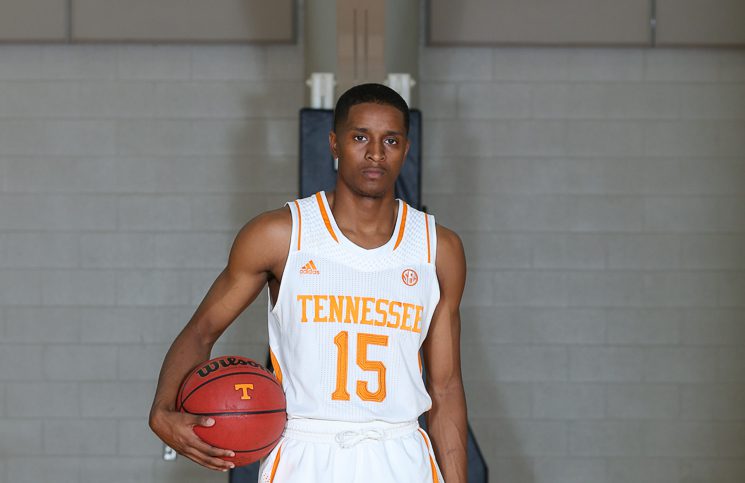 Thursday afternoon, the NCAA cleared Detrick Mostella to officially join the Vols. Tennessee fans can breath a sigh of relief. A consensus 4-star prospect who played a year of prep ball before signing with Tennessee, Mostella was undoubtably the biggest get in Tyndall’s first signing class. And now he’ll get a chance to show what he can do.

The Vols must replace four of their top five scorers this season. Fortunately, Mostella, a 6-3, 170-pound combo guard from Decatur, Ala., is a dynamic scorer.

“Detrick is an explosive athlete who can make plays off the dribble and create opportunities for his teammates,” Tennessee Head Basketball Coach Donnie Tyndall said when Mostella signed. “He is another versatile, long, athletic perimeter player who fits perfectly in our system and style of play. We’re very excited to add this high character young man to our Tennessee basketball family.”

Anyone who saw Mostella play in the Pilot Rocky Top League, a league he led in scoring with 39 points per game, knows he can dunk on anyone and score from anywhere on the floor.

Originally an Oklahoma State signee, Mostella took a winding road to Rocky Top. He received a release from OSU and spent the 2013-14 season playing ball at Notre Dame Preparatory School – the same school former Vol point guard Antonio Barton attended.  Mostella committed to Pittsburgh last summer before deciding to play for Tyndall at Tennessee in May. A circuitous route, to be sure, but one which has him at a program where he can make an immediate impact.

Mostella will be a freshman this season with four years of eligibility remaining and should see a ton of playing time. Look for him to play point guard and shooting guard starting out. He’s undersized to play the three, but may have to at times depending on how the rest of the roster develops.

In terms of raw ability, Mostella is loaded. The Vols have featured some phenomenal athletes the last few the years, but Mostella may be the best leaper of all of them. When you combine his springy legs with his quick first step and prowess for consistently getting to the rim, you’ve got the makings of a special player. His ability to breakdown a defense and create opportunities for his teammates should open up the floor when he’s on the court. He’s always in attack mode and surrounding him with shooters has the potential to make Tyndall’s offense very effective, even without a returning post presence.

If there’s one weakness in Mostella’s game it’s his jump shot – he needs to improve his stoke from a consistency standpoint. He’s not a bad shooter, by any stretch, and he can really put up points when his shot is falling, but adding a consistent shot from beyond the arc would make him a nightmare matchup for even the SEC’s elite defenders.

Watching Mostella develop the next few seasons should be a blast. Expect numerous highlights along the way.