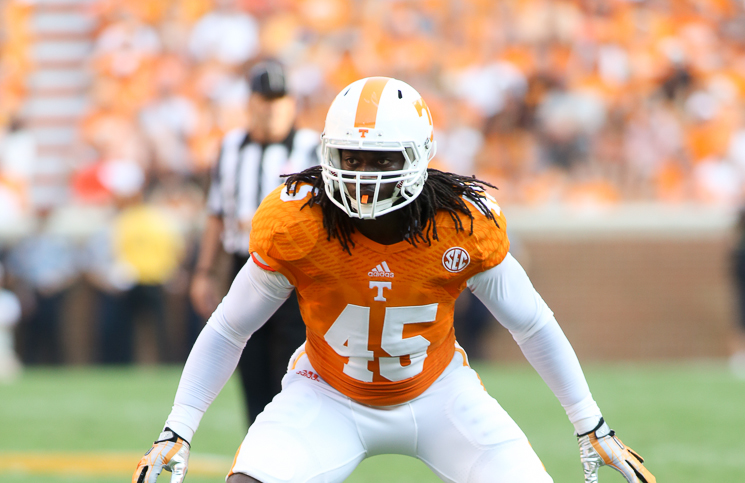 Like the defensive line, this unit will lose a lot of production from 2013, but also has the chance to improve if returning veterans can take the next step and newcomers are as good as advertised.

Though starters Dontavis Sapp and Brent Brewer have moved on, one big advantage the linebackers have is the return of stalwart A.J. Johnson, a sure-fire bet to pile up 100+ tackles and a Preseason First-Team All-SEC selection.

He chose to forego the NFL Draft for a chance to come back and help Tennessee get back on the right track. He’s also hoping to upgrade his draft stock. The best way to do both of those things is to create more big plays. Most of Johnson’s career tackles have come well past the line of scrimmage. The Vols need more TFLs, sacks, deflections, forced fumbles and overall big plays from him in 2014. 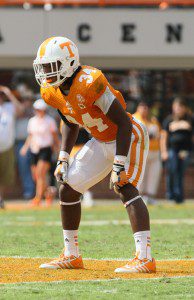 Johnson’s a lock for the starting lineup in virtually any defensive formation. Look for rising sophomore Jalen Reeves-Maybin, who was a special teams demon in 2013, to be a regular as well. The converted safety gives defensive coordinator John Jancek a lot of flexibility. He can cover plenty of space in pass defense and is progressing on his run-stuffing ability as well.

With the overall lack of depth at LB, there are huge expectations for the group of talented newcomers, especially Dillon Bates and junior college transfer Chris Weatherd.

It’s hard to image much more of a college-ready linebacker than Bates, the son of Tennessee legend Bill Bates. Like all the newcomers, he’ll have to prove himself on the field, but from a size/athleticism/football IQ combination, it’s not at all a stretch to think that he will play early and often.

Weatherd, the final piece of the 2014 class to be cleared into school, also brings huge upside, but will be behind many teammates after missing the summer. Look for Jancek to find ways to use him early in specific blitz packages and perhaps even lining him up at defensive end in situations as he gets up to speed overall.

Those four stand out as some of the most likely candidates to play. Remember, with the Vols regularly utilizing the nickel package, only two linebackers are on the field at many times. But this is a position where a few surprises could emerge.

Kenny Bynum, who once committed to Butch Jones at Cincinnati before ending up at Tennessee, will look to make some noise in his third year. Justin King returns to the fold after spending a year at tight end before redshirting in 2013 and learning the LB position.

Newcomers Gavin Bryant, Neiko Creamer and Colton Jumper also have a chance to get their feet wet on special teams and perhaps make a case to see the field on defense.

Position switches could alter the mix as well. We’re counting Curt Maggitt as a defensive end for now, though he obviously has experience at OLB if he’s needed. Versatile freshman defensive back Elliott Berry could work at OLB as well. And like they did with Reeves-Maybin and Brewer in the past, keep an eye out for the possibility of bulking up a safety such as LaDarrell McNeil or Cortez McDowell and trying them at OLB.

“He is doing some good things, he has really improved since last year, now he is full time at linebacker, it is going to be an opportunity for him to grow. He has to get better at tackling and doing some things that linebackers are actually doing on an every down basis. But he has shown that he can move around and he is smart, so that is good.”

In the 4-3, Johnson, Reeves-Maybin and Bates could very well be the first three in. Johnson and JRM might be the nickel duo – giving the Vols one strong run stuffer and a strong space player when in that look. Weatherd will be on to watch as he catches up to speed and there should be reps for the taking for the likes of Bynum and Bryant. This will be an interesting position to watch unfold throughout camp and the season overall.

Perhaps one of the freshmen such as Bryant, Creamer or Jumper could take one, but with the overall lack of depth at this position, that might be a luxury move at this point.