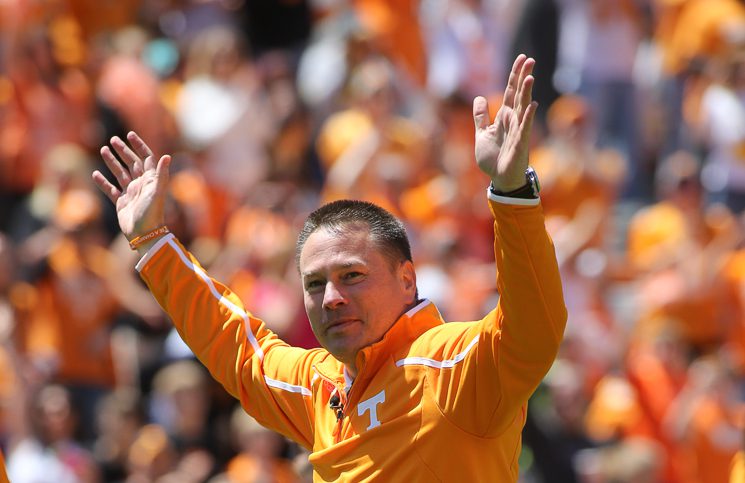 According to at least one metric, Butch Jones is one of the top coaches in the nation. Dave Bartoo, who founded CFBmatrix.com, is one of the nation’s leading college football minds. If you’ve followed his work, you know he predicted Tennessee to beat South Carolina in 2013…way back when Dooley was still the coach. In fact, he picks every major college football game in the spring and his simple and effective system is beating Vegas once again this year.

All that to say, he knows what he’s talking about. His system is proven. And, according to his coach effect rankings (more on that coming), Butch Jones is one of the best coaches in the SEC and the nation.

Bartoo uses two simple methods to determine coach effect. First up, he calculates talent level by equally weighing the rankings of the major recruiting services and by factoring in attrition and returning production (experience). That metric alone is the most accurate in the nation for predicting the outcomes of college football games. He also takes into account where the game is played. Each stadium in college football has a strength rating. In other words, sometimes home field advantage will result in the less talented home team beating a more talented visiting team.

“Coach effect is either positive or negative,” Bartoo explains. “To earn positive coaching effect in the matrix, coaches need to win games they were predicted to lose. Essentially they need to beat a team that the matrix said had a talent and field advantage. To get negative coach effect, you lose games you were predicted to win. You had more talent. You had the field and talent in your favor but you still lost. Only about 20% of games result in either positive or negative coach effect. Most games are defined by talent level and where the game is played. It’s simple.

Butch Jones had a +2 coach effect during his time at Cincinnati. In other words, his coaching over the coarse of three years resulted in a net +2 wins when factoring in losses to less talented teams (resulting in negative coach effect) and wins over more talented teams (resulting in positive coach effect). Through his tenure at Tennessee, Jones is -2 with those two losses being to Vandy and Missouri. But when you view his coaching career from Cincinnati to present, he’s even.

Jones ranks 26th nationally in coach effect, two spots behind Nick Saban and ahead of Urban Meyer (27th) and Les Miles (28th). If Jones is able to replicate the success he had at Cincinnati over the next two seasons, he’d rank third in the SEC in coach effect (based on current rankings) and be tied for first in the SEC East with Steve Spurrier. You can view Bartoo’s full rankings here.