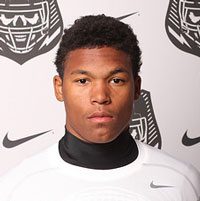 One of Tennessee’s longest-tenured commitments in the class of 2016 announced that he’ll be opening up his recruitment on Tuesday afternoon.

Cornerback Bailey Phillips, a 5-foot-8, 160-pound prospect from Mesquite, Tex., announced via Twitter that he’s decommitted from the Vols and will be exploring his options going forward.

Phillips initially committed to Tennessee in July of 2014, becoming the second member of the 2016 class at that time.

The Vols currently have a commitment from North Carolina native Marquill Osborne and are pursuing several other top cornerback prospects, including in-state targets Joejuan Williams and Donte Vaughn.

It’s difficult to say exactly what spurred Phillips to make this decision – and what story you hear may be a matter of who you spreak to. But it is fair to say that Phillips was one of the smallest and lowest-ranked prospects in Tennessee’s 2016 class – a group that is expected to be smaller in total number, giving the Vols the ability to be a bit more choosy this cycle.

The Vols now have 10 commitments in the 2016 class, which is now ranked 17th nationally, according to the 247Sports Composite rankings.