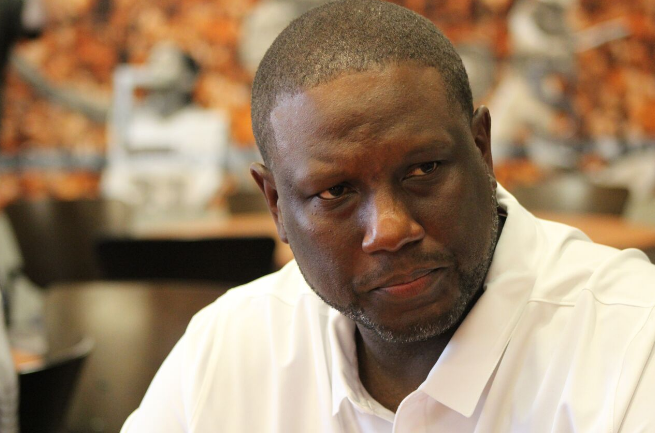 A handful of coaches on Butch Jones’ staff have been head coaches at previous stops, but none were thrust into a situation quite like the one Tennessee’s first-year offensive coordinator, Larry Scott, was thrown into at Miami.

“That experience definitely shaped me to where I am now,” Scott said of his time at Miami in a media availability on Friday afternoon. “Until you sit at that end of the table, I don’t think there is anything that will make you ready for that until you take on those responsibilities and run the program from top to bottom.

“It was one of the best experiences that I’ve ever had.”

Viewed as the “most successful interim head coach” in Miami history, Scott took over for Al Golden midway through the 2015 season after Golden was fired as the Hurricanes’ coach. The former Canes’ tight end coach won four of his first five games as the interim coach, leading Miami to an 8-5 record before losing to Washington State in the Sun Bowl.

“People always ask how you know you’re ready,” Scott said. “Well, a lot of people don’t know until they’re thrust in those positions. For me, I had to get ready fast. I had about an hour to get ready and take on the challenges that we had at that point in time at the University of Miami. It was about grabbing the bull by the horns and attacking the situation and refocusing what it’s all about. It all goes back to the players.

“It was an awesome opportunity, but it’s definitely helped me as an assistant coach. It gives you the feeling of confidence that you need moving forward. You always look at the next challenge, accept it and then go.”

“We’re always going to play to what we think are our strengths of our football team,” Scott stated. “If that happens to be where there’s some heavy tight end packages in the game plan that week based on what we feel like gives us a chance to do what our job is, which is score points, then we’ll do that.”

Tennessee’s tight ends have yet to be a focal point in the offense since Butch Jones arrived. Senior Ethan Wolf has seen the most action and been utilized the most, but he has just 67 catches for 752 yards and four touchdowns in his 38 career games for the Vols.

If anyone can make the Vols’ tight ends more effective, it’s Scott.

While the changes to Tennessee’s offensive schemes aren’t fully known yet, the changes made in team philosophy can already be seen this offseason.

Throughout Jones’ tenure at Tennessee, one of the most questionable decisions he has made is not allowing the offense to partake in 7-on-7 drills during the summer. The concern with the Vols’ running 7-on-7 drills from Jones’ standpoint was that injuries could happen and because coaches aren’t allowed to be out there, bad habits could potentially develop.

This offseason, however, Tennessee’s players have been allowed to partake in 7-on-7 work, and the pros far outweigh the cons. It is far more important for an offense with newcomers at key positions to be running on the same page, improve on their timing, and develop leadership.

And Larry Scott has been an advocate for it.

“With a relatively young football team and new quarterbacks and young receivers, we felt like we needed to get those guys working together, communicating, being on the same page communicating the verbiage, playing together and getting a feel for each other,” Scott said. “This builds the sense of urgency, competition, standards and expectations. All of those things are already in place and allows you to hit the ground running once fall practice starts.”

Tennessee’s fall camp begins on July 29th. Players report on Friday, July 28th and will participate in the first practice of fall the next day.