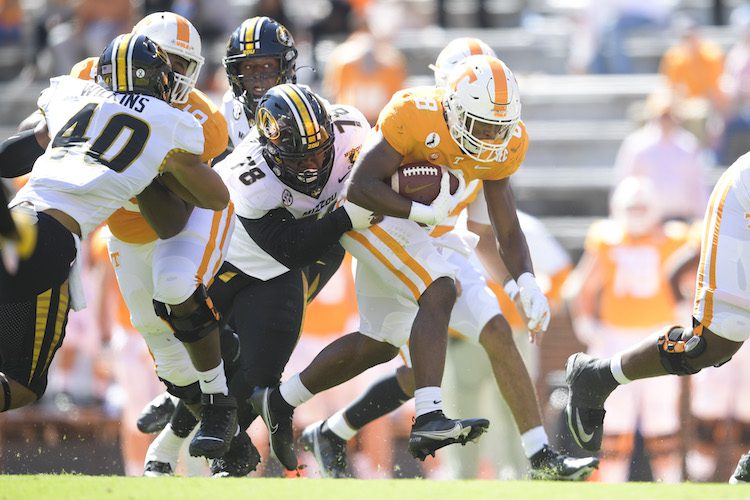 No. 21 Tennessee defeated Missouri 35-12 in its home opener on Saturday afternoon inside of Neyland Stadium.

The Vols led from start to finish and were able to avoid a Missouri comeback in the third quarter when senior safety Theo Jackson picked off a pass while the Tigers were driving deep into Tennessee territory. Offensively, Tennessee dominated on the ground to lead the Vols to a win.

Here are our position grades from Tennessee’s win over Missouri in its home-opener.

Jarrett Guarantano turned in another nice performance against Missouri on Saturday. It wasn’t spectacular, but it was efficient and got the job done. He made good decisions on his way to completing 14-of-23 passes for 190 yards and a touchdown. Guarantano also did a great job of making sure Tennessee was in the correct run plays. Most importantly, he didn’t turn the football over.

Tennessee’s receivers turned in their second consecutive good performance on Saturday. They weren’t asked to do a ton, but when they were, they answered the bell. Josh Palmer was Tennessee’s leading receiver for the second consecutive week, hauling in four catches for 71 yards. Brandon Johnson added three catches, while freshman Jalin Hyatt recorded the first two catches of his career for 54 yards.

The Vols averaged 13.6 yards per reception against Missouri.

The tight ends weren’t called upon in the passing game. Jacob Warren made his first career start, but didn’t receive a target. Princeton Fant recorded the only target and it didn’t result in a catch. To the naked eye, it appeared that Warren and Fant held up well blocking in the run game.

The offensive line played tremendous football in Cade Mays’ debut in orange. Gray and Chandler were awesome, but the big uglies up front helped pave the way for the duo. Jeremy Pruitt wasn’t pleased with how many hits Guarantano took, but the offensive line only gave up on sack. The unit will face a big test this Saturday against Georgia.

Tennessee’s defensive line didn’t play well for a second consecutive game. There were some bright spots, but it played inconsistent football once again. The defensive line was solid in the first quarter and at times towards the end of the game, but the unit really struggled in the second and third quarter.

The Vols d-line struggled to push the pocket and succeed in their run fits. Missouri running back Larry Rountree averaged 4.7 yards per carry as he rushed for 84 yards and a touchdown on 18 carries.

Tennessee’s outside linebackers took a step back from its tremendous Week 1 performance against South Carolina. Against Missouri, the group didn’t generate a consistent pass rush. Kivon Bennett had just one hit on the quarterback to go along with three tackles. Deandre Johnson, the reigning SEC Defensive Lineman of the Week, had one sack, one tackle for loss and a hit on the quarterback.

Against a lackluster Missouri offensive line, Tennessee’s pass rush should have had a much better performance.

Henry To’o To’o was excellent once again, but Jeremy Banks and Quavaris Crouch also struggled once again. To’o To’o had six tackles and a tackle for loss, but Banks and Crouch combined for seven tackles and zero tackles for loss. Banks and Crouch are still adjusting to playing a key role next to To’o To’o in Tennessee’s defensive line, but they need to do it quickly with games against Georgia and Alabama around the corner.

After giving up 290 yards to a lackluster South Carolina passing attack, Tennessee’s secondary struggled once again. The Vols especially struggled to communicate, which led to multiple coverage busts. The highlight of the game for the secondary was Theo Jackson. Tennessee’s senior safety came up with a huge interception that killed a Missouri drive deep into UT territory that would have made it a one-score game.

The secondary is still banged up. Bryce Thompson only played on third downs and Shawn Shamburger still isn’t available. The hope is that once the unit gets back to looking like it should on paper, it’ll regain the form that it found last season.

The special teams unit did not have a great day. Brent Cimaglia missed another field goal, the second in as many games. And Pruitt was not pleased with Brooks’ kickoffs. Brooks did have a good day punting the ball, however, averaging 45.0 yards per punt.

Tennessee didn’t get an opportunity to return any punts or kickoffs. On the flip side, Tennessee’s coverage teams were good, not allowing Missouri to have any big returns.

Another SEC game, another SEC win for Jeremy Pruitt and his coaching staff. The miscommunications in the secondary and at inside linebacker need to improve immediately. Tennessee’s defensive line needs to desperately take a big step forward as well. But the offense is further ahead at this point than expected and can really lean on the running game to grind out wins while the defense catches up.

You have to love Pruitt going for fourth down on four different occasions in short-yardage situations. As he said following the game, you can’t coach or play in fear. The Vols definitely aren’t doing that and it all starts with the tone set forth by the head football coach.