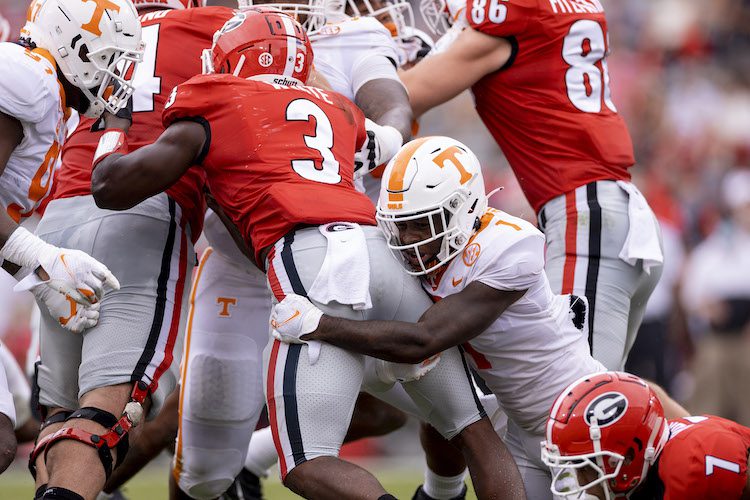 Tennessee has fallen in both the AP Top 25 Poll and the Amway Coaches Poll following its 44-21 loss to No. 3 Georgia on Saturday. The Vols are now ranked No. 18 in the AP Poll and No. 17 in the Coaches Poll.

The Vols have now been ranked in the AP Top 25 on 588 different occasions, 14th-most in all of college football.

The Associated Press began its college football poll on Oct. 19, 1936, and it is now the longest-running poll of those that award national titles at the end of the season. The preseason poll was started in 1950. A panel of 62 sports writers and broadcasters from around the country votes on the poll weekly.

In the Coaches Poll, Tennessee dropped five spots from No. 12. The Vols are one of five SEC teams ranked in this week’s Poll. Jeremy Pruitt’s squad was joined by Alabama (2), Georgia (3), Florida (9), Texas A&M (11), and Auburn (14). LSU fell out of the rankings after losing to Missouri.

The Amway Coaches Poll powered by USA TODAY Sports is conducted weekly throughout the regular season using a panel of head coaches at FBS schools. The panel is chosen by random draw, conference by conference plus independents, from a pool of coaches who have indicated to the American Football Coaches Association their willingness to participate. Each coach submits a Top 25 with a first-place vote worth 25 points, second place 24, and so on down to one point for 25th.

After seeing its eight-game winning streak snapped to Georgia, Tennessee now turns its attention to Kentucky (2-1). The Vols and Wildcats are scheduled to kick off at 12 p.m. ET from Neyland Stadium.