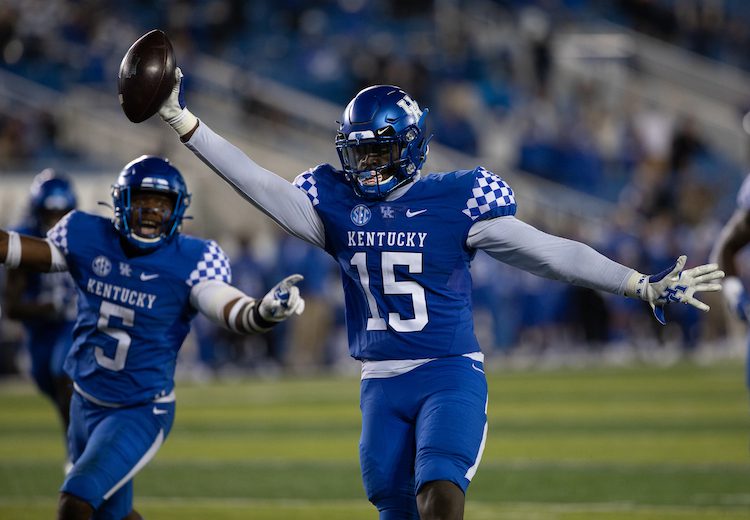 Here’s a complete preview of Tennessee’s opponent this Saturday, the Kentucky Wildcats.

Kentucky’s offense starts and ends with its rushing attack.

The Wildcats have rushed for at least 400 yards in four of its past seven games and currently lead the SEC and rank 19th nationally in rushing offense. Against Ole Miss last Saturday, UK had its most total offense in an SEC home game (559 yards) since Nov. 13, 2010 vs. Vanderbilt.

Kentucky had three players (Chris Rodriguez Jr., A.J. Rose and Terry Wilson) rush for more than 100 yards against the Rebels, which was the first time in the modern era (since 1946) the program had three 100-yard rushers in a game. The game against Ole Miss was also the most rushing touchdowns against an SEC opponent (six) since Oct. 6, 1973 at Mississippi State.

Wilson is the team’s leading rusher through three games, but Kentucky also has three talented running backs. Talented redshirt-sophomore Kavosiey Smoke will not play due to a broken rib, but Rose and Rodriquez will still be a handful for the Vols to handle. Rodriguez has rushed for 5.6 yards on 33 carries this season, while Rose has tallied 5.7 yards a rush on 30 carries.

Kentucky is able to have tremendous success running the football because of its offensive line. The unit is stocked full of NFL talent up front. Nine offensive starters return in 2020 for the Cats, including four members of the “Big Blue Wall” in left tackle Landon Young, center Drake Jackson, right guard Luke Fortner and right tackle Darian Kinnard.

The O-line has totaled 99 career starts and has helped Kentucky post four consecutive seasons of 2,000 or more rushing yards, with at least one 1,000-yard individual each season.

Where Kentucky struggles offensively is through the air. Wilson is tremendous with his legs, but is inconsistent with his arm. Part of the inconsistencies with Wilson is in part because Kentucky lacks playmakers in the passing game.

Josh Ali leads the team with 18 receptions for 208 yards, but no other Kentucky receiver has caught more than four passes. The Wildcats are desperately looking for other pass catchers to step up.

Kentucky tight ends Justin Rigg and Keaton Upshaw have combined for six catches, 52 yards and a touchdown. Cats tight ends coach Vince Marrow has one of the most experienced position groups on the team with four returning players in Brenden Bates, Nik Ognenovic, Rigg and Upshaw.

Like the offense, it starts up front for the Kentucky defense. The Wildcats return seven starters from a 2019 defense that ranked 14th nationally in scoring defense, allowing 19.3 points per game. The defense also ranked 21st nationally and fourth in the SEC in total defense yards per game (324.6), second in passing yards allowed (167.8) and 12th nationally in team passing efficiency defense (113.03 rating points). Kentucky has allowed 30 or fewer points in 28 of the past 30 games.

The Wildcat defense is led from the middle in senior outside linebacker Jamar “Boogie” Watson and junior Will linebacker DeAndre Square. Watson is one of the best returning edge rushers in the SEC after totaling 36 tackles, a team-high 11.5 tackles for loss, 6.5 sacks and a team-high seven quarterback hurries in 2019. He already has two sacks this season and an interception.

It doesn’t stop with Watson and Square at linebacker, however. Junior outside linebacker Jordan Wright, junior Mike linebacker Jamin Davis, and redshirt freshmen J.J. Weaver and K.D. McDaniel all play important roles in the defense. Davis is currently the team’s leading tackler and Wright sealed the win over Mississippi State with an eight-yard interception return for a touchdown, respectively.

Senior Phil Hoskins has also played a key role for Kentucky’s defensive line this season. Hoskins has helped make up for the loss of defensive tackle Calvin Taylor Jr. to graduation.

The Cats return three starters from last season in the secondary. Cornerback Cedrick Dort Jr., senior free safety Yusuf Corker and senior cornerback Brandin Echols all helped Kentucky lead the SEC and rank second nationally in passing yards allowed (167.8 yards per game) in 2019 behind Ohio State. Kentucky allowed only nine touchdown passes all season, tied with Clemson and Ohio State for the fewest in the nation.

LSU transfer Kelvin Joseph has been a big addition to the secondary this season. He has started the first three games after sitting out the 2019 season due to transfer rules. He recorded his first career interception in the win over Mississippi State.

Kentucky punter Max Duffy was named the 2019 Ray Guy Award winner and earned first-team All-America honors. Duffy is the school’s all-time leading punter at 46.50 yards per kick and recorded a career-long 75-yard punt in the season-opener this season at Auburn. He’s averaging 48.06 yards per punt this season.

Senior Matt Ruffolo won the starting placekicking job during preseason practice. Ruffolo is 1-for-2 on field goal attempts this season and 9-of-10 on PATs.

Chance Poore handles kickoffs for the Wildcats. He also has placekicking experience, as he made 5-of-9 field goal attempts last season and was 24-of-26 on PATs.