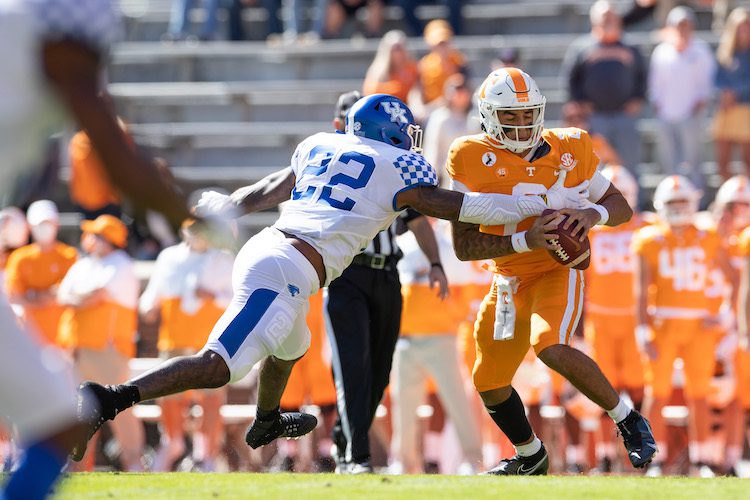 No. 18 Tennessee fell to Kentucky 34-7 as a result of tumultuous quarterback play on Saturday inside of Neyland Stadium.

It was Kentucky’s first win over the Vols in Knoxville since 1984. It was also the first time the Cats have beaten a ranked Tennessee team since 1959.

The game was knotted at zero at the end of the first quarter. Three straight turnovers to begin the second quarter, however, led to Kentucky taking a 17-0 lead with 6:18 remaining in the first half.

Jarrett Guarantano’s first turnover of the game came on Tennessee’s first drive of the first quarter. Guarantano tried to find Cedric Tillman near the sideline on 3rd-and-5, but Kentucky corner Kelvin Jospeh jumped the pass and returned it 41-yards to put the Cats on the board.

Guarantano threw his second pick-six of the game on the very next drive. Tennessee was driving well into Kentucky territory courtesy of several nice plays from Eric Gray. But on 1st-and-10 from the 15-yard line, Guarantano tried to force a pass and was picked off by Kentucky’s Jamin Davis, who returned it 85-yards to put the Cats up 14-0.

Jeremy Pruitt made a change at quarterback following Guarantano’s second pick-six in as many drives. Pruitt called upon J.T. Shrout, but the redshirt-sophomore couldn’t turn the tide. On 2nd-and-21, Shrout tried to force a throw and was picked it off. It wasn’t returned for a touchdown, but it did result in a field goal to put Kentucky up 17-0.

Guarantano would come back into the game after Shrout’s interception. He helped orchestrate a scoring drive before the half, but Gray shouldered the majority of the load to set up a five-yard Ty Chandler rushing touchdown. The Vols trailed 17-7 at the half.

Guarantano would start the second half, but Tennessee couldn’t muster any offense in the third quarter. The Vols had three drives and went three-and-out on every single one of them. In the midst of the offense sputtering, the defense gave up a one-yard passing touchdown to Terry Wilson and a 27-yard field goal to put the Cats up 27-7 with 1:02 left in the third quarter.

Kentucky tacked on a fourth quarter rushing touchdown courtesy of Christopher Rodriguez to put the game away. True freshman Harrison Bailey made his debut for the Vols, relieving Guarantano midway through the fourth quarter.

Bailey finished 1-of-4 for 24 yards in his first appearance. His first collegiate completion was a 24-yard pass to true freshman Malachi Wideman.

Guarantano finished 14-of-21 for 88 yards. He did not throw a touchdown and threw two interceptions. He also fumbled once, though Tennessee recovered it.

The Vols now turn their attention to No. 2 Alabama. Kickoff next Saturday is scheduled for 3:30 p.m. ET on CBS.