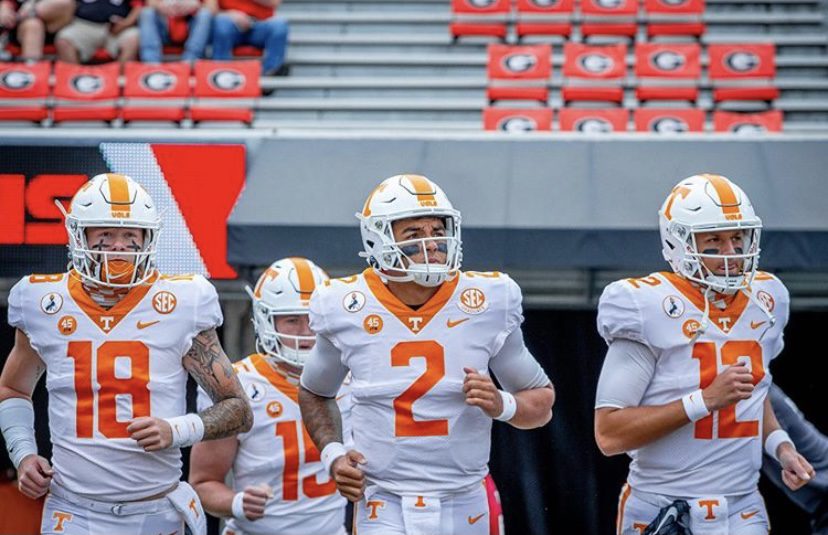 Vols head coach Jeremy Pruitt is stuck between a rock and a hard place when it comes to his program’s quarterback situation.

On one hand, redshirt senior Jarrett Guarantano is not trust worthy at this point following a performance against Kentucky in which he threw two pick-sixes. On the other hand, J.T. Shrout didn’t take advantage of his opportunity when Guarantano was benched, coming in and immediately throwing his own interception. On the imaginary third hand, sophomore Brian Maurer and true freshman Harrison Bailey simply aren’t ready.

“We have to do a better job up front collectively as a group offensively,” Pruitt told reporters over Zoom on Monday. “Being more efficient in third downs and protecting the quarterback — whoever the quarterback is.”

Following an embarrassing 34-7 loss to Kentucky over the weekend, Tennessee now turns its attention to No. 2 Alabama. Pruitt said that the quarterback position would be evaluated as the week progresses when asked who would start against the Crimson Tide, but he also admitted that he may not be ready to give up on Guarantano just yet.

“Am I wanting to put Jarrett Guarantano on the shelf?” Pruitt asked. “No, absolutely not. I think the guy has a lot of really good qualities about him. He has helped us win a lot of football games. Did he make a few mistakes Saturday? Sure he did. I think everybody on our football team and in our organization all could have done better, starting with me. This isn’t about one person. This is about everybody in our program. I think everybody within our program understands that.

“Jarrett didn’t play his best game the other night. There’s some other guys that didn’t play their best game, too. He is going to have to go out here and earn it in practice like everybody else.”

“Jarrett’s thrown very few interceptions in practice all fall camp,” Pruitt said. “He has done a really nice job taking care of the football. It is why he has been our starting quarterback.

“You go back and look, let’s just take Saturday for example. We throw an out route for an interception. They are playing middle of the field coverage in man-to-man and we run an out route. The corner never got in a back pedal. He just squats on a route. That starts with the wide receiver. We have to play with more speed. If the guy is covered, don’t throw the ball. That was a mistake in a couple areas. We got a chance. We are throwing the ball down the field and we got a chance to throw a check down and we try to force the ball inside, which we shouldn’t do. There are two spots there that really hurt us.”

Could Tennessee implore a two-quarterback system against Alabama? Or even play multiple quarterbacks?

Kickoff in Neyland Stadium between Tennessee and No. 2 Alabama is scheduled for 3:30 p.m. ET on Saturday.