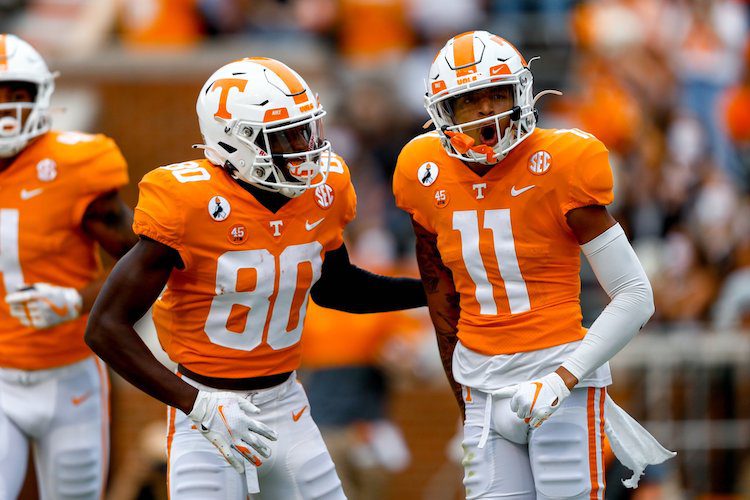 No. 2 Alabama defeated Tennessee 48-17 inside of Neyland Stadium on Saturday.

The Vols allowed 587 yards of total offense and five rushing touchdowns, while also spotting Alabama a touchdown courtesy of a scoop-and-score touchdown on a fumble. Tennessee (2-3) has now lost to the Crimson Tide 14 years in a row.

Here are our five observations from Tennessee’s loss to Alabama, its third-straight loss.

Pruitt goes with Guarantano at quarterback

It was pretty obvious who was going to start at quarterback against Alabama based off of Jeremy Pruitt’s comments throughout the week leading into the game. Guarantano did in fact start, as Pruitt told the Vol Network before the game that he was far and away the best quarterback in practice all week.

Guarantano played much better against the Crimson Tide than he did in his previous two outings, particularly in terms of protecting the football. He did not throw an interception as he was 13-of-24 passing for 162 yards and two touchdowns. Guarantano was 2-of-6 passing on third down for three yards.

Alabama’s offense put up 587 total yards of offense against the Vols, the most they’ve allowed all season. The Crimson Tide threw for 417 yards, and rushed for 170 yards and five touchdowns. Through the air, Alabama averaged 14.9 yards per completion.

The Crimson Tide were able to have so much success because of the little resistance Tennessee put up. UT’s defensive line didn’t pressure Mac Jones, nor were they good against the run. As a result, Jones was 25-of-31 for 387 yards, while running back Najee Harris rushed for 96 yards and three touchdowns on 20 carries.

Tennessee’s secondary wasn’t good either. Jones was able to have so much success because his receivers were consistently open. Even with Jaylen Waddle breaking his foot on the opening kickoff and not playing one offensive snap, Alabama had four receivers tally at least 60 receiving yards.

On averaged, Tennessee had to pick up 6.6 yards on third down in order to keep the drive moving. It’s hard to win football games when you’re not picking up third downs on offense, and when your defense can’t get off of the football field.

JT Shrout won the backup quarterback position coming out of fall camp. In his first action of 2020 against Kentucky last Saturday, Shrout threw an interception trying to force a ball into triple coverage and was pulled after just one possession. With true freshman Harrison Bailey not ready to play according to Pruitt, Brian Maurer was the backup quarterback against the Crimson Tide.

Maurer was the quarterback for just one possession during the final moments of the second half. He attempted one pass that picked up just one yard, but he did pick up a first down with his legs on a 3rd-and-13 when he rushed for 15-yards.

True freshman wide receiver Jalin Hyatt was the brightest spot of Tennessee’s offense on Saturday. Hyatt only had two catches, but both catches were explosive plays that the wide receiver room has been lacking this season.

Hyatt’s speed was on full display when he got behind an Alabama defensive back and Guarantano hit him in stride in the end zone for a 38-yard touchdown. He then made a nice catch on the sideline that went for 48-yards. It would have gone for a touchdown had he not stepped out-of-bounds when he made the catch.

Tennessee has a bye week following its loss to Alabama. The Vols will travel to Arkansas in two weeks following the open date to take on the Razorbacks. Kickoff is scheduled for 7:30 p.m. ET on either ESPN or the SEC Network.