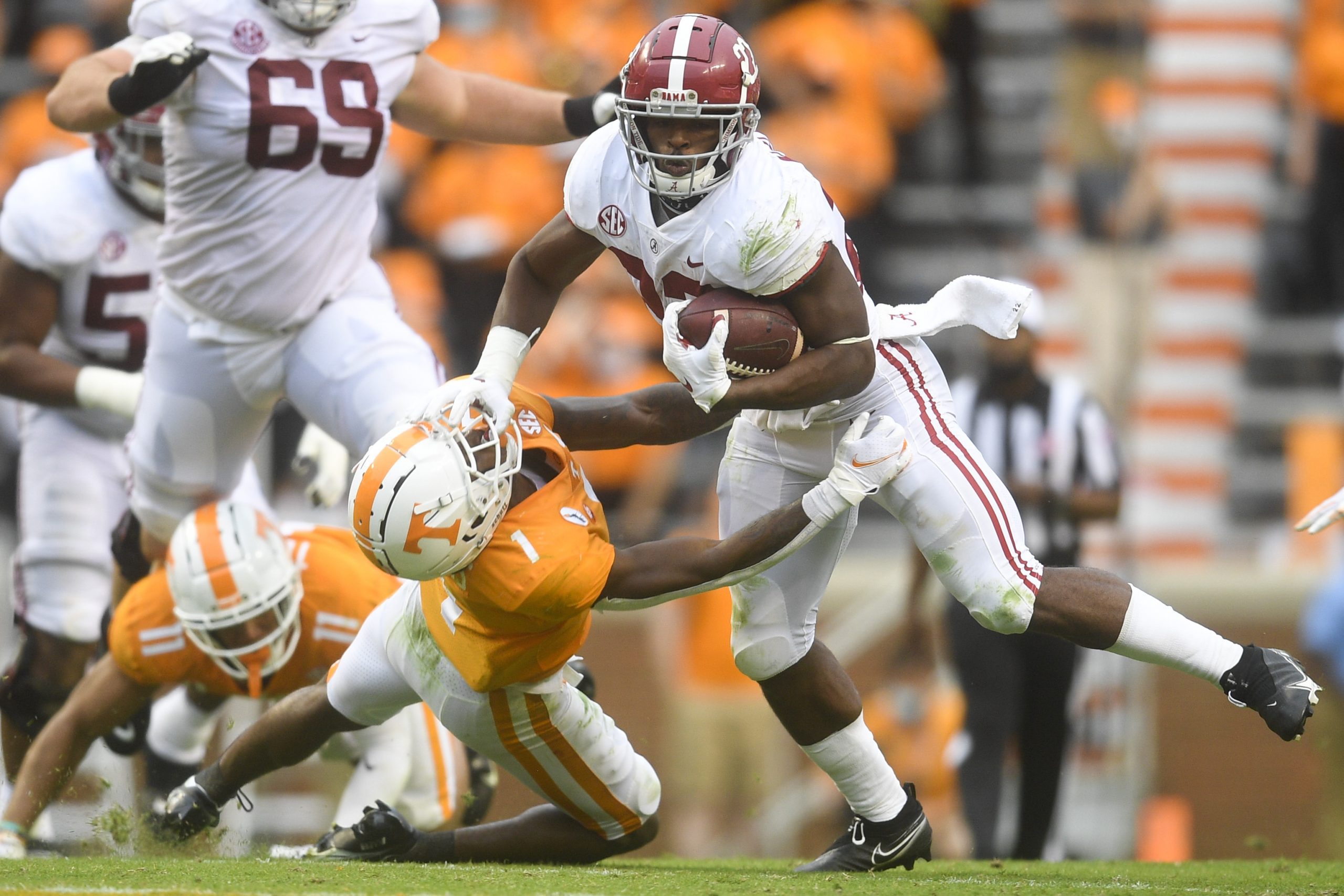 No. 2 Alabama defeated Tennessee 48-17 inside of Neyland Stadium on Saturday.

The Vols, who have now lost three consecutive games, allowed 587 yards of total offense and five rushing touchdowns, while also spotting Alabama a touchdown courtesy of a scoop-and-score touchdown on a fumble. Tennessee (2-3) has now lost to the Crimson Tide 14 years in a row.

Here are our position grades from Tennessee’s loss to Alabama.

Jarrett Guarantano’s performance against Alabama wasn’t near as bad as it was against Georgia and Kentucky in the two weeks prior. He made a couple of beautiful throws against the Crimson Tide, most notably on the two touchdown passes to Jalin Hyatt and Josh Palmer. But from start-to-finish, Tennessee’s quarterback position still lacks playmaking ability. Guarantano completed just 54% of his passes as the Vols were the first team this season to not throw for at least 250 yards against Alabama.

Tennessee’s running backs had a solid outing against Alabama, but it wasn’t great. Eric Gray and Ty Chandler combined to rush for just 93 yards on 29 carries, averaging just 3.2 yards per carry. Jeremy Pruitt wasn’t pleased with the backs following the game. Pruitt felt as if the group left some yards on the field and could have finished runs better.

Contributing to Tennessee being the first team to not pass for at least 250 yards against Alabama were the wide receivers, who struggled to create separation and get open. Hyatt was the lone bright spot outside of Palmer’s touchdowns. The true freshman is the lone receiver creating separation right now. He hauled in two catches for 86 yards and his first career touchdown reception.

The tight ends were a little more involved against Alabama than they had been in the four games prior, but that’s not saying much. The unit is still pretty non-existent. They leave a lot to be desired as blockers and aren’t a threat to opposing defenses through the air. Princeton Fant had one catch for eight yards.

Tennessee’s offensive line played fairly well against Alabama’s front seven. The Vols kept Guarantano clean, not allowing any sacks, and they opened up holes for the running backs to run through. The group still lacks consistency, however.  If they can get healthy, the unit gives Vol fans a sense of optimism that the second half of the season can be more successful than the first half.

Kivon Bennett and Deandre Johnson have been pretty non-existent since the opener against South Carolina. Bennett had one tackle against Alabama and Johnson didn’t even make an appearance on the stat sheet. The unit as a whole failed to set the edge against the run, or generate any pressure off the edge.

Tennessee simply turned in a terrible defensive performance against Alabama. No unit played well. Alabama’s running backs were getting several yards past the line of scrimmage before they were even being touched, and whenever they would encounter a Tennessee defender, the Vols were missing tackles. Henry To’o To’o played his worst game of the season, finishing with just two tackles. And he didn’t have any help from anybody else.

The unit that had the worst afternoon was Tennessee’s defensive backs. Even without Jaylen Waddle, Mac Jones was able to throw for 387 yards and four Alabama receivers had at least 60 receiving yards. Tennessee’s pass rush did the secondary no favor. Jones had all day to throw the football, but even with the lack of pass rush, Alabama’s wide receivers ran wide open all day long.

You never want your special teams unit to be the only bright spot in a game, but that was the case on Saturday. Brent Cimaglia did his job, making his only field goal attempt from 33-yards out, while Paxton Brooks averaged 45.8 yards on six punts. Tennessee didn’t have any coverage busts on the day either.

Saturday’s game was yet another unfriendly reminder of how far Tennessee is from Alabama, but Tennessee’s coaches didn’t necessarily put their best foot forward to help the players be successful. Particularly on the offensive side, where the play-calling was far too conservative, which resulted in multiple three-and-outs. The game serves as yet another wake-up call for everybody in the program. Execution from the players needs to be better, but the coaches need to be better as well.