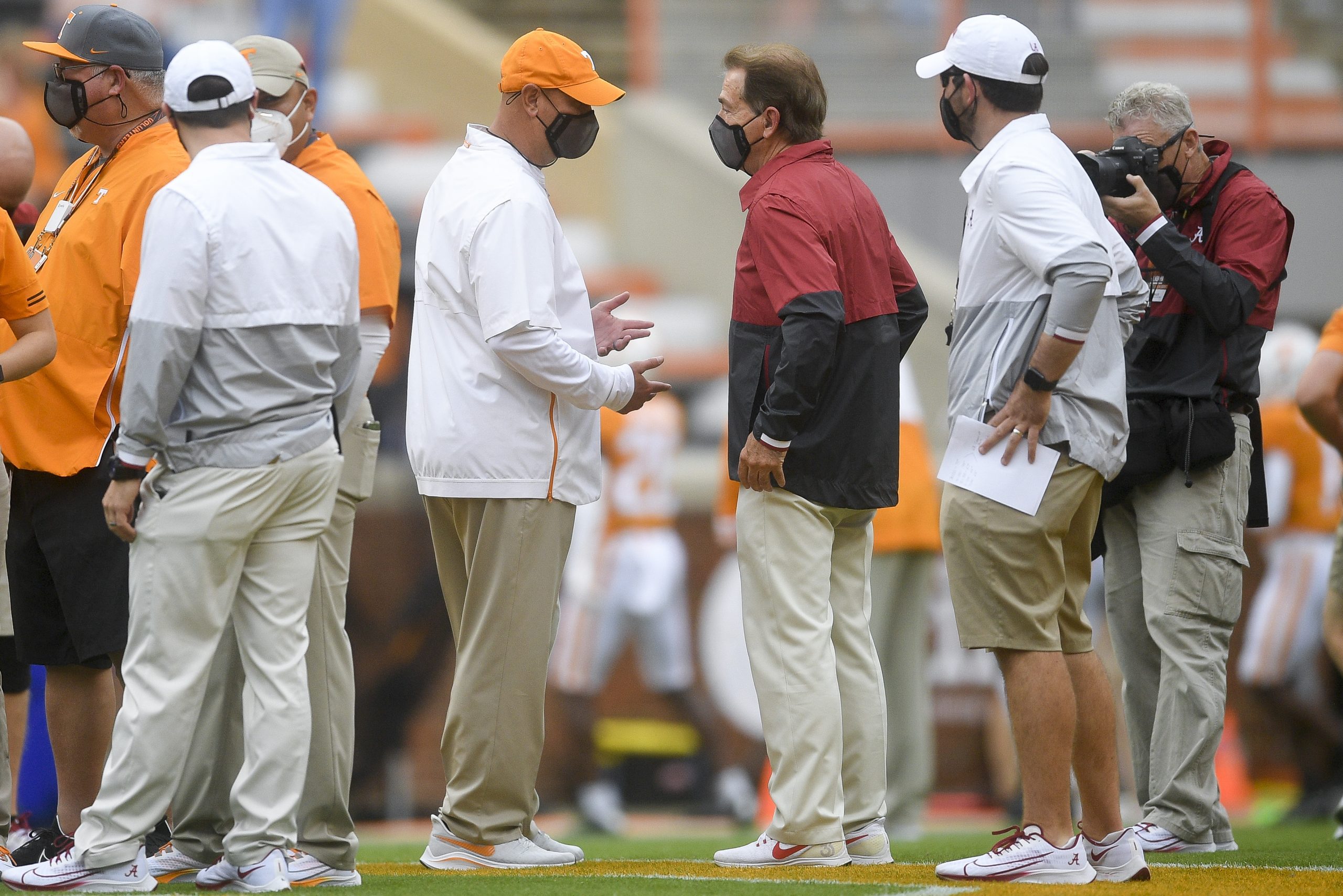 Jeremy Pruitt believes the gap between Tennessee and Alabama is closing regardless of what Saturday’s scoreboard said.

With a 48-17 win over the Vols, the Crimson Tide extended their winning streak in the rivalry to 14-straight. Alabama has won by double-digits in 12 of those 14 wins, as Tennessee has not scored more than 21 points during the streak.

“That’s one thing that’s frustrating to me and it’s frustrating to our players. There are times that we’ve done some really good things. But as a team, whether it’s offense playing really good, defense playing really good and special teams, we’ve not put any of that together. And that’s what the elite teams in our conference, that’s what they do. They don’t have many bad plays. They don’t make many mistakes. They make the other team beat them. There are times when we’ve done that this year, but we’ve not done it for a whole game. Even in the games we’ve won, we’ve not done that.”

It isn’t just the Alabama game that hasn’t gone in Tennessee’s favor, however. Pruitt is now 0-8 against the ‘big three’ on Tennessee’s schedule each year — Alabama, Florida and Georgia.

“To be honest, they’ve been better than us,” Pruitt said. “We’ve played with them in spurts. But from an execution, finishing standpoint, we’ve not been able to sustain and do that. When I look at our team, I really like our team, our makeup. Got a lot of young guys that are going to have a chance to be really good players. And as they grow and develop, we’re going to continue to close that gap there.”

Tennessee’s loss to Alabama on Saturday was full of self-inflicted wounds. Jarrett Guarantano did not throw any interceptions, but Eric Gray did fumble, and there were multiple three-and-outs as a result of poor execution.

Defensively, Tennessee allowed Alabama to put up 587 yards of offense with ease. Mac Jones was sacked twice, but the Crimson Tide quarterback was rarely pressured throughout the 60 minutes of action. Jones completed his first 11 passes on his way to completing 25-of-31 throws.

There was little resistance from the Vols against the rush as well. Alabama’s running backs rushed for 167 yards on 33 carries, averaging 5.06 yards per carry. The Crimson Tide rushed for five touchdowns on the afternoon.

“For us to beat these guys today, we needed to play clean football and we needed a couple things to go our way,” Pruitt said. “That’s the truth of the matter. I think a great indication of talent level, when you look at your team, is look and see who gets drafted.

“Now we have a lot of young guys on our team, and we have some older guys on our team, that are continuing to improve. We’ve got to execute at a little higher level, obviously, on both sides of the ball to give ourselves a chance.”

Vols senior defensive lineman Matthew Butler agrees with Pruitt’s assessment that the program is closing the gap. Butler added that there’s a distinct difference between the two programs as they currently stand, however.

“Alabama has a culture — a winning culture,” Butler told reporters after the game. “We have a winning history.”

Tennessee will look to snap its three-game losing streak in two weeks when it takes on Arkansas following a bye week. The Vols and Hogs will kickoff at 7:30 p.m. ET on Nov. 7.