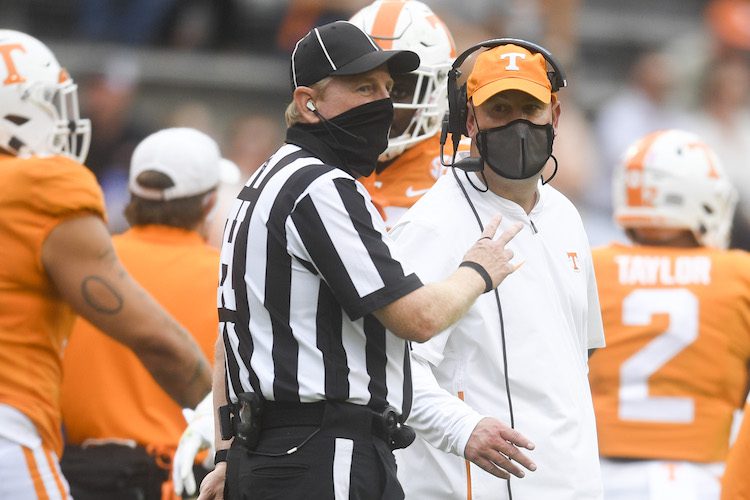 Tennessee’s performance against No. 2 Alabama on Saturday was yet another deflating loss for Vol fans to add to the lengthy resume.

In fact, it was the third-straight deflating loss on the heals of an eight-game winning-streak dating back to last season. It began with a second half collapse in Athens, followed by a pathetic showing against Kentucky that resulted in the Wildcats’ first win in Knoxville since 1984. The loss to the Crimson Tide then put the cherry on top.

It wasn’t that Tennessee lost to Georgia and Alabama, either, but rather the margin of defeat that was so deflating. As disappointed as the fans may be, nobody is more disappointed in the results than the program its self according to Vols head coach Jeremy Pruitt.

“Hey, nobody is more disappointed than the people within our program,” Pruitt said following the loss to Alabama. “I can assure you.

Despite the loss, Pruitt is still encouraged where the Vols are at under his leadership. And he still believes Tennessee is going to get to where it wants to be — it’s just going to take some time.

Tennessee will look to snap its three-game losing streak following an open date to end the month of October. The Vols will be back in action on Nov. 7 when it takes on Arkansas in Fayetteville. Kickoff with the Hogs is scheduled for 7:30 p.m. ET.