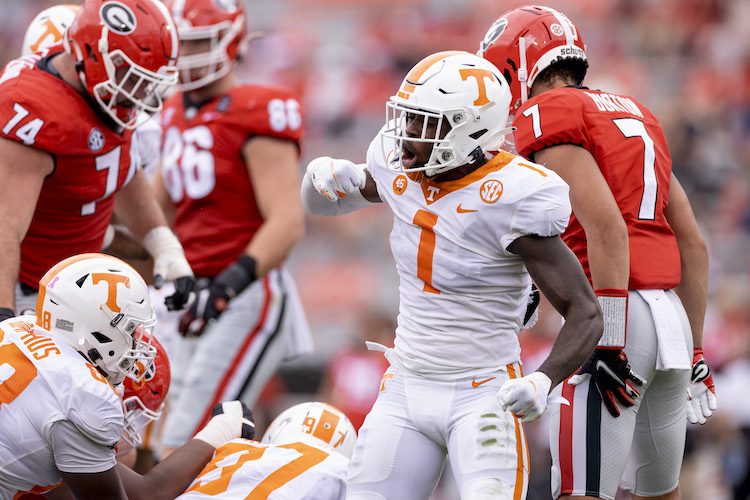 Tennessee junior safety Trevon Flowers graded out as the best safety in the SEC midway through the season, Pro Football Focus revealed when it released its ‘highest-graded SEC player at every position through Week 9.’

Flowers has a grade of 74.1 according to PFF through five games this season.

“Trevon Flowers is one of the few bright spots on a struggling Tennessee Volunteers team that has now dropped three straight,” PFF writer Zach Tantillo wrote. “The junior out of Atlanta is the highest-graded defender on the Volunteers and has offered some sense of stability on the back end while also being an active participant defending the run.

“Flowers is the tackle leader for the Volunteers, with 13 of his 37 coming against the run. And on the back end, Flowers has allowed only 47 yards on six receptions, and he’s tallied one forced incompletion.”

Flowers leads the team with 35 tackles this season. He tied a career-high with 10 tackles and one tackle for loss while also forcing his first career fumble in his last outing against No. 2 Alabama. He had five tackles and a pass breakup against Kentucky and was second on the team with eight tackles against No. 3 Georgia, while also adding a pass breakup at #3 Georgia. He set a new career-high with 10 tackles, including a TFL in the win over Missouri and started at safety in the season-opening win at South Carolina, recording two tackles.

The Atlanta, Georgia native appeared in six games with two starts at safety as a sophomore last season, but missed the final seven games of the season after breaking his leg against Mississippi State.

Flowers appeared in seven games with one start as a true freshman in 2018. He signed with the Vols as a three-star prospect out of Tucker High School. Flowers originally committed to Kentucky to play baseball and took a three-year break from football to focus on baseball but played his senior season of football in 2017, helping lead Tucker to a 12-2 record and the state playoff semifinals. He was a three-sport athlete who also played basketball.