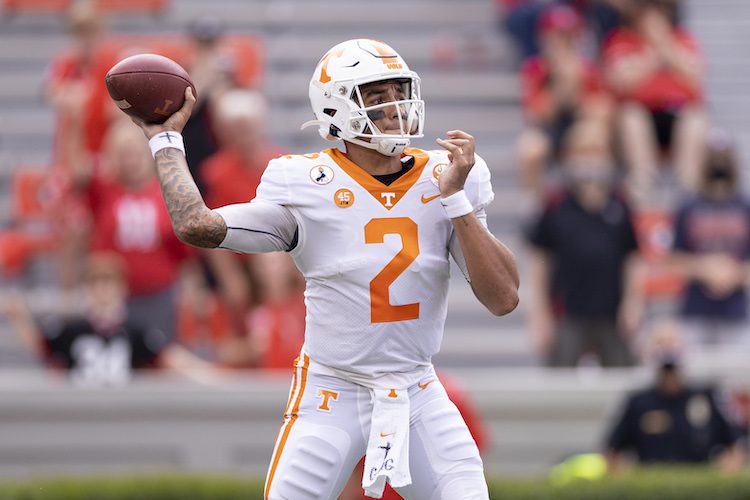 These are the five keys to victory for the Volunteers:

It’s pretty simple. Jarrett Guarantano and the Tennessee offense have to play turnover-free football against the Razorbacks if it wants to get back on track. The Vols should be 3-2 at this point in the season, but Guarantano threw two pick-sixes in the first half of the Kentucky game to lead the Vols to a loss.

Arkansas has been great at forcing turnovers this season. The Hogs have picked off 10 passes, which is the third-most in the country. They’re winning the turnover margin by a margin of 1.20, ranking 10th nationally in a category that has led to Arkansas exceeding expectations midway through 2020. Tennessee on the other hand, has turned it over eight times in five games, and ranks 74th in turnover margin (-0.20).

Because of the potential of turnovers, Jim Chaney can’t rely on Guarantano to go out and win this football game. Chaney must rely on the running game to take pressure off of Guarantano and lead the Vols to victory.

Arkansas has struggled at stopping the run this season. The Hogs are allowing 178.20 rushing yards per game which is the third-most in the conference. While Tennessee’s offensive line has underperformed to this point, the unit will be as healthy as it’s been all season long. It must assert its dominance and open up holes for Eric Gray and Ty Chandler.

Defend the middle of the field

Opponents are averaging 13.0 yards per catch over the middle of the field against Tennessee this season. They’re completing 76% of the passes they attempt. Arkansas has the weapons to take advantage of the glaring weakness if the Vols haven’t sured up the middle of the defense over the bye week.

Feleipe Franks has progressed quite well under Kendal Briles at Arkansas after transferring from Florida over the offseason. Sophomore wide receiver Treylon Burks has been tremendous out of the slot for the Razorbacks this season. He’ll look to feast against the Vols over the middle of the field. If Shawn Shamburger hasn’t improved, or if freshman Key Lawrence draws the opportunity and struggles, it’ll be a long night for the Vols regardless of their offensive production.

Not only has Tennessee struggled over the middle of the field, it’s allowed 20 passes to go for 20+ yards through five games this season. The secondary needs to take a huge step forward, but the defensive front could really help them out by getting some pressure on the quarterback.

Tennessee’s pass rush has been non-existent for much of the year. When Franks does struggle, it’s when he becomes flustered and attempts to force things. The Vols must get after the quarterback and fluster him. If not, Franks will pick the defense apart by getting the ball to Burks, running back Rakeem Boyd, senior receiver De’Vion Warren, sophomore tight end Hudson Henry, and sophomore wide receiver Mike Woods.

Arkansas has weapons, but the Hogs have struggled at times across the offensive line. The ability to generate pressure will present itself and Tennessee must take advantage.

Boyd’s stats don’t pop out at you when looking at the stat sheet. In fact, he’s not even the team’s leading-rusher at this point in the season. Trelon Smith, the Hogs’ junior running back, is at 251 rushing yards.

Boyd isn’t at the top of the stat sheet because he’s been banged up this season, however. And in Arkansas’ last game out, he looked like the player that has been talked about as a future NFL Draft pick over the last couple of years. Boyd rushed for 100 yards on 18 carries as Arkansas rushed for a season-high 222 yards.

As it has been in pass protection, Arkansas has also been inconsistent in opening up holes in the running back. Tennessee’s defensive front must play well if the Vols are going to leave Fayetteville with a win, both against the run and the pass.