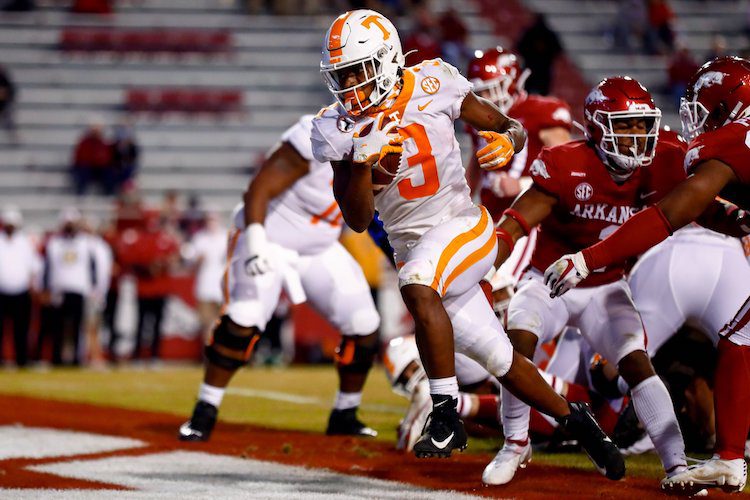 Tennessee blew a double-digit halftime lead in Fayetteville Saturday night to fall to Arkansas 24-13 and lose its fourth-straight game.

The Vols dominated Arkansas in the first half, specifically on the offensive side of the ball, but a Brian Maurer-led offense couldn’t generate any points following a head injury that ended Jarrett Guarantano’s night on the second possession of the second half.

Maurer saw action on three possessions and all three possessions ended in a three-and-out. He ended the game 0-of-4 passing before he was benched for true freshman Harrison Bailey. Mauer had two carries for three yards.

While Bailey wasn’t able to put any points on the board, he was able to move the ball a little bit better. Bailey twice led Tennessee to the red zone before being picked off on a fourth down throw and on a throw to the end zone at the end of regulation.

Bailey finished the game 6-of-9 for 65 yards and two interceptions. He rushed for seven yards on two carries.

Tennessee’s defense didn’t do the offense any favors. It allowed the Razorbacks to score 24 consecutive points, all in the second half. Arkansas out-gained the Vols 260 to 115 in total yards. The Razorbacks rushed for 82 yards and threw for 178 yards after only throwing for 37 yards in the first half.

Tennessee led 13-0 at the half as a result of scoring on three of their first five drives. Brent Cimaglia connected on two field goals, and Eric Gray rushed for a 1-yard touchdown.

Guarantano wasn’t asked to do a ton in the first half, but he performed well when his number was called. He finished 5-of-8 for 42 yards while guiding Tennessee to 177 total yards of offense over the opening 30 minutes, 135 of which were on the ground.

The Vols return home next Saturday to take on No. 7 Texas A&M. Kickoff is scheduled for 3:30 p.m. ET on ESPN.