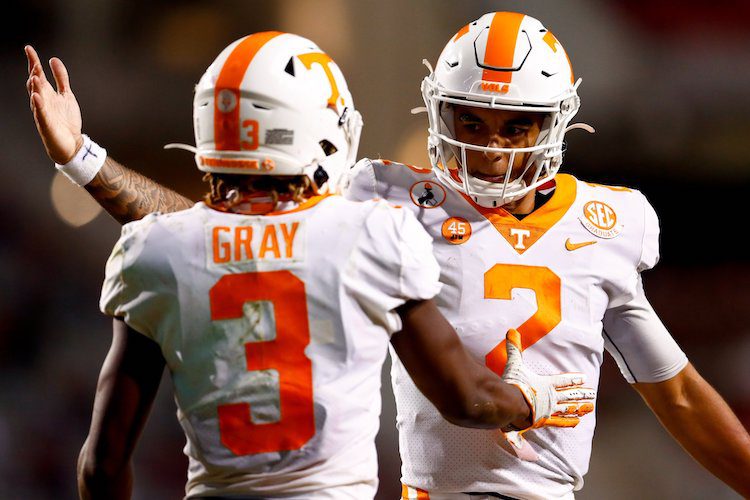 The Vols blew a 13-0 halftime lead to the Razorbacks. Jarrett Guarantano’s night ended early due to a head injury, which caused the offense to spiral out of control and be shutout in the second half. On the flip side, Tennessee’s defense allowed Arkansas to score 24 unanswered points.

Here are the five biggest observations from Tennessee’s loss to Arkansas:

Tennessee looked terrific in the first half coming off of its bye week. The Vols had a solid 13-0 lead at the break, but it didn’t take long for them to squander that lead in the second half.

Jarrett Guarantano suffered a head injury on the second possession of the second half and it resulted in the Vols offense spiraling out of control. Brian Maurer relieved Guarantano and guided the offense to three straight three-and-outs. Harrison Bailey relieved Maurer and was able to get the offense moving a little bit better, but it didn’t result in any points.

One of the big reasons Tennessee’s defense struggled on Saturday night is because of its inability to defend the middle of the field. It’s been an issue for the Vols the entire season, but it showed no signs of progression against the Hogs following the bye week.

Senior nickleback Shawn Shamburger didn’t make the trip. Fellow senior Theo Jackson was forced into the role and gave up several big plays on slants over the middle of the field to Arkansas wide receiver Treylon Burks. It just wasn’t Jackson, however. Tennessee’s linebackers and safeties also struggled to slow down the Hogs, as well as Kenneth George Jr.

Say what you will about the redshirt senior, but Tennessee’s offense couldn’t move the football when Guarantano suffered his head injury while scrambling on the second possession of the third quarter.

Guarantano’s arm wasn’t beating the Hogs, but Barry Odom’s defense at least respected the potential of it. This allowed Tennessee’s running game to get going and rush for 135 yards in the first half. When Maurer was in the game, Arkansas didn’t respect his arm and loaded the box in an effort to stop the run, which it did.

Tennessee couldn’t afford to run the football by the time Bailey entered the game.

Jeremy Pruitt decided against kicking a field goal on fourth-and-four from the Arkansas 25-yard line late in the fourth quarter with his team trailing 24-13. A field goal would have made it an eight-point game, thus giving the Vols a chance to tie the game with a successful two-point conversion on their following drive. Tennessee did find itself in that position, as it got the ball back once again.

Pruitt decided against kicking the field goal because he didn’t feel like Tennessee was “close enough” despite kicker Brent Cimaglia having already made a 50-yard, and 48-yard field goal, respectively. Pruitt would go on to say he didn’t feel comfortable trotting out Cimaglia because he was a gametime decision due to injury and almost didn’t make the trip to Fayetteville.

Tennessee looked terrific in the first half. Sure it only had 13 points and should have likely been up 21-0 at the half, but the Vols were doing everything they wanted to do offensively. They were dominating the running game and Guarantano was effective when asked to make a play with his arm.

Defensively, Tennessee gave up 153 total yards to Arkansas, 116 of which were on the ground. More yards than they would have liked to give up, but they played ‘bend but don’t break defense’ and put up a zero on the scoreboard.

The Vols looked like a much better team in the first half following the bye week, but it didn’t last long. And then it spiraled out of control when Guarantano went down due to injury.

The Vols return home next Saturday to take on No. 7 Texas A&M. Kickoff is scheduled for 3:30 p.m. ET on ESPN. The Aggies are coming off of a dominating 48-3 win over South Carolina on the road.