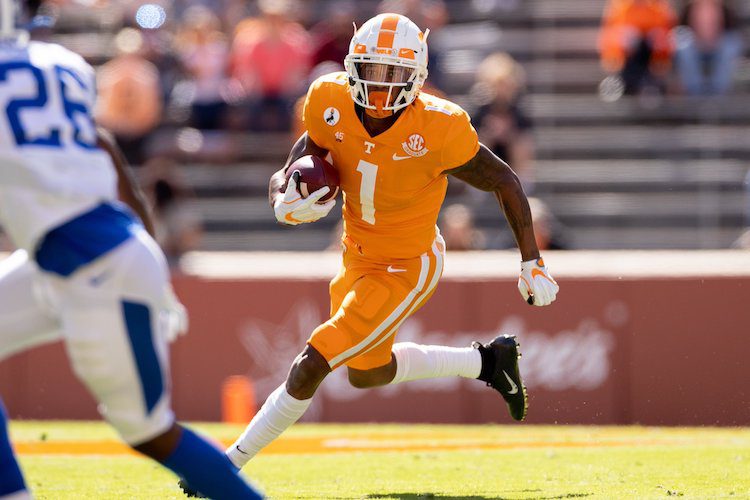 Kennedy discussed which young players stood out to him over the open week, what It meant to get a call from Peyton manning to congratulate him on being a National Football Foundation National-Scholar Athlete finalist, and much more.

Here’s everything Kennedy had to say:

Scroll down and go to the next page to see what Velus Jones and Deandre Johnson had to say.

On what it meant to get a call from Peyton Manning to congratulate him on being a National Football Foundation National-Scholar Athlete finalist:

“It definitely meant a lot. Throughout the years that I’ve been in college, all of the hard work that I’ve put in in the classroom and on the field, to see that pay off and get the recognition, it meant a lot to me. I was very excited to get that. My family is proud of me. It was exciting.

On what it was like to talk to Peyton Manning:

On how the team used the open week to improve fundamentals:

“It’s been big for us. This week, when we didn’t play, fundamentals were a big part for us. We were able to get back to the basics and bring some of the young guys along. Those were two things we were able to work on this bye week.”

On not being able to play inside of Neyland Stadium in the month of November:

“We definitely gonna miss it. Any time you get to play in Neyland it’s always a fun time. We also gotta focus on what we need to do to win as well.”

On how the team found out the Texas A&M game was postponed:

“We found out right before practice. Once we found out, we adjusted on the fly. We were able to get things going and focus on fundamentals.”

On if the offensive line developed more chemistry during the open week:

“Any time you have a week like this, you have time to talk about some of the things that you wouldn’t be able to talk about in a normal week, such as technique and how the guy next to you works. It was a great week to do that and we kind of got back to the fundamentals.”

On why Tennessee has struggled in the second half:

On how the quarterbacks have looked in practice over the last week or so:

“Because of the bye week they got a lot of opportunities. I think they’re coming along, progressing mentally and also physically. I think they’ve been pretty good.”

On which young players impressed during the open week:

“Some of the guys like Malachi Wideman, Jimmy Holiday, Jimmy Calloway and some of those young skill players. They’ve come along and they’re progressing well, learning the plays and balling out. They’re able to make explosive plays and that’s great to have in an offense.”

On if playing at Auburn is special after growing up 30 minutes from there:

“Most definitely. Any time I get a chance to go back home it means a little more. It’ll be very special to me.”

On his relationship with Auburn during his recruitment:

“The recruitment process came down to three schools. Alabama, Auburn, and Clemson. Alabama got the edge because I felt I could learn under Nick Saban and win a championship. Those were the two things that led me to go there.”

On his outlet from football:

“If i separate from a short period of time, I might watch Netflix. Last week, I was filled with doing a final exam to graduate, so that’s what I was working on throughout the whole week. I didn’t get a chance to separate from football. I was doing school, so if it’s not one, it’s the other for me.”

On if college football games being canceled increases the alertness of making sure people aren’t letting their guard down when it comes to football:

“Most definitely. We emphasize ‘control what we can control outside of the facility.’ So that’s wearing our mask, social-distancing, and staying away from the rest of the population. That’s what we harp on. That’s been the biggest thing for us.”

On what his future looks like as he approaches finishing his third degree:

“After the season, when my career ends, I think I want to get a doctorate in sports psychology. That’s kind of the thing that I want to work towards. I love consulting with athletes and doing those things. I’ve been fortunate enough to have an internship here at the University of Tennessee with Dr. Joe Whitney. We were able to work through different scenarios, as far as helping athletes. I kind of just pick his brain. That’s what I’ve been doing throughout the season. It’s been great and I’m fortunate to be able to have that opportunity.”

On where his motivation comes from for the last four games of the season:

“The motivation, to be honest, is really giving my all for Tennessee. About a year ago, I decided to come back. I wanted to help this team and also earn another degree, so that’s been my motivation as far as helping the team, being a leader and doing what I can do to help the team be successful.”

On what he has seen on film from the Auburn defensive line:

“The way I would describe them is they are ‘space eaters.’ They kind of eat up double teams and they align they’re linebackers, which I think is a strength of the defense. They allow them to play well. That’s what I think about the D-line.”

Go to the next page to see what Velus Jones had to say.