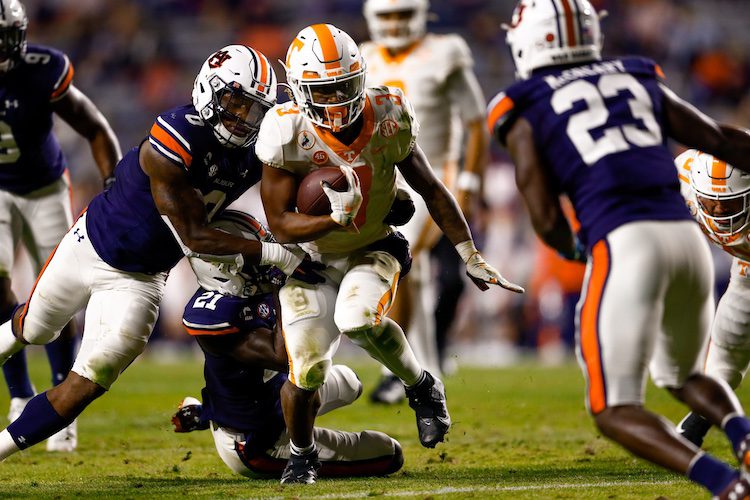 A Jarrett Guarantano pick-six late in the third quarter led to the Vols fifth-straight loss, a 30-17 defeat to No. 23 Auburn.

“We had at least a 10-point swing going down in the red area there in the third quarter. Struggled to get off the field on third down at times. Early in the game missed some tackles. When you look at that, it all adds up. Had a blown coverage one time, for the first score. Guys played hard. But we just made some mistakes.”

Tennessee (2-5) was trailing 13-10 late in the third quarter when it was driving deep into Auburn (5-2) territory. On second-and-seven from the 12-yard line, Guarantano tried to find Josh Palmer in the end zone. Palmer was well-covered, allowing Tigers safety Smoke Monday to jump the pass and return it 100-yards for a touchdown. It put AU up 20-10 with 2:21 remaining in the game.

Tennessee marched right back down the field the following drive to begin the fourth quarter on the legs of Eric Gray and Ty Chandler. Guarantano was ultimately sacked on third down bringing on Brent Cimaglia to attempt a 38-yard field goal. Cimaglia missed wide left to keep it a 10-point game.

It was Cimaglia’s second missed field goal on the evening. He missed a 50-yard field goal attempt on Tennessee’s opening drive of the game. Cimaglia made one of his three attempts from 47-yards out.

Cimaglia’s lone field goal put the Vols up 10-0 with 13:42 remaining in the second quarter as the Vols were the better team in the first half. Tennessee junior corner Bryce Thompson helped keep Auburn off of the scoreboard when he picked off Bo Nix late in the first quarter to kill a Tigers drive that was deep into UT territory.

Auburn immediately scored following Cimaglia’s second missed field goal of the game. The Tigers marched right down the field and capped off the drive with a nine-yard rushing touchdown from DJ Williams to extend the lead to 27-10 in the fourth quarter.

Williams’ touchdown was the last of 27-unanswered points for the Tigers to win their fifth game of the season. Along with a pair of field goals from Auburn kicker Anders Carlson, Nix found Anthony Schwartz wide open in the Tennessee secondary for a 54-yard touchdown.

Nix finished the game 17-of-26 for 220 yards, a touchdown and an interception. On the ground, Nix rushed for 10 yards.

True freshman Harrison Bailey entered at quarterback for the Vols following the last Auburn touchdown. Bailey marched Tennessee right down the field to push the ball into the end zone on a 1-yard touchdown. It was the final score of the game, as the Tigers won by 10.

Guarantano finished the game 15-of-23 for 156 yards and one interception. He did not throw for a touchdown, but did rush for a nine-yard touchdown to give Tennessee an early 7-0 lead.

Bailey was 7-of-10 passing in limited playing time for 86 yards, orchestrating one scoring drive in two possessions. He rushed three times for 15 yards.

Tennessee will head to Nashville next Saturday night to take on Vanderbilt (0-7). Kickoff with the Commodores is scheduled for 7:30 p.m. ET on the SEC Network.