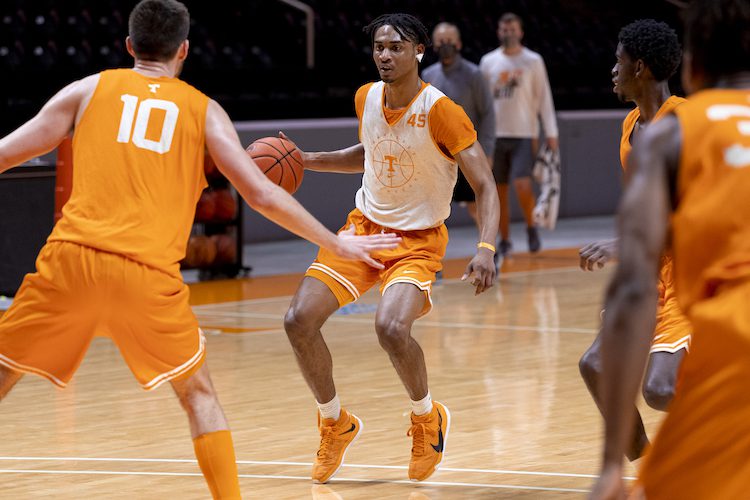 Tennessee true freshman guard Keon Johnson has generated quite the buzz since arriving on campus.

Johnson arrived as the No. 19 overall player in the country and one half of the five-star guard duo Rick Barnes signed over the offseason. Five-star Jaden Springer joined Johnson, arriving as the No. 16 overall player and with more buzz after playing his final season of high school basketball at IMG Academy.

All indications are that Springer has been everything the coaching staff had hoped he would be and more. But for as good as Springer has been, Johnson has been even better. Johnson’s stock is skyrocketing as a result of the buzz he’s generated since stepping foot on campus.

Two separate mock drafts that were released on Tuesday projected him as a top 10 pick.

Sam Vecenie of The Athletic even projected him as a top five pick. In Vecenie’s 2021 way-too-early NBA Mock Draft, he has Johnson being selected No. 5 overall. Vecenie also had Springer being drafted No. 38 overall, and Vols senior forward Yves Pons No. 47 overall, respectively.

“I’m just going to call my shot on this one,” Vecenie wrote about Johnson. “I think Johnson is an absolute stud despite the fact that he was ranked outside of the top-15 in his recruiting class. He’s one of the most explosive athletes in the country, a 6-foot-5 wing who can get wherever he wants on the court because of how sudden and powerful his movements are.

“Offensively, he’s a great driver and can finish way above the rim because of that quick-twitch athleticism. He’s also a developing shooter who clearly seems to have made some strides there, and he also plays unselfishly with solid passing ability. Defensively, he plays exceptionally hard and tries to impact the game by switching across the positional spectrum 1 through 3. He has a real desire to be great on defense. He’s the guy in this class that I expect to burst onto the scene and become something of a surprising top half of the lottery type of talent.”

“The dark horse of the group, at least relative to his No. 28 recruiting ranking, is Tennessee’s Keon Johnson, who is garnering rave reviews from the Vols’ coaching staff in the preseason,” Givony wrote. “He has been projected in our lottery since an impressive showing at the USA Basketball minicamp in October 2019, but missed most of his senior year of high school with a knee injury.

“Johnson is an ultra-aggressive, explosive guard who plays with outstanding energy and activity, and his skill level seems to be catching up with his physical tools. His passing, shooting and ballhandling looked significantly improved prior to his injury. Likely to see time as a big playmaker who defends all over the floor, Johnson is another high-upside prospect who could make a run at the top five, similar to Isaac Okoro did.”

Tennessee is currently scheduled to begin its season on Dec. 12 against Cincinatti inside of Thompson-Boling Arena.

The Vols were scheduled to play two games this week, but a COVID-19 outbreak within the program forced them to cancel those games against Charlotte and VCU. Tennessee also had to cancel next Wednesday’s trip to Indianapolis to face No. 1 Gonzaga, as well as a trip to South Bend to face Notre Dame.