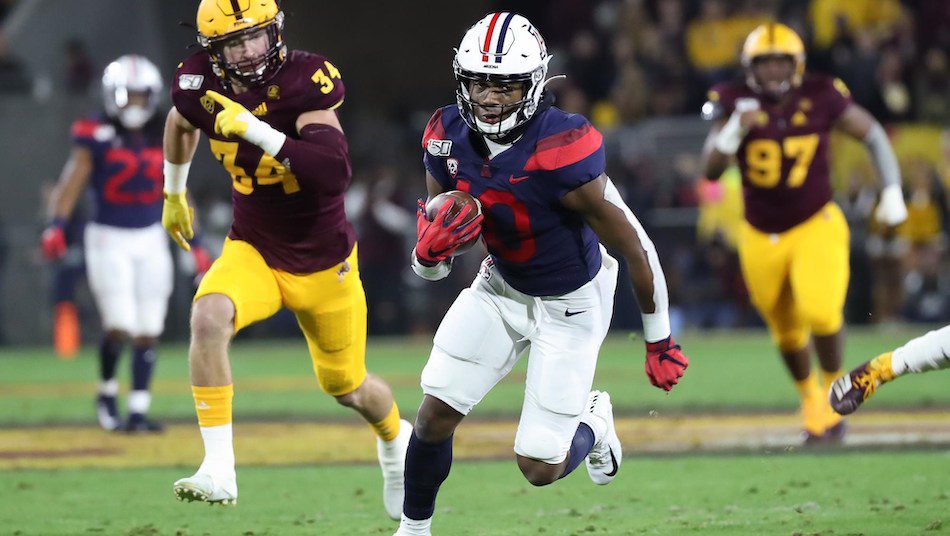 Tennessee has offered a scholarship to Arizona transfer wide receiver Jamarye Joiner, who announced that the Vols offered him on Twitter Monday afternoon.

“Blessed To Receive An Offer from The University of Tennessee,” Joiner said on Twitter.

Blessed To Receive An Offer from The University Of Tennessee! pic.twitter.com/6fGNAaMryn

Joiner entered the transfer portal on Dec. 18 after playing three seasons at Arizona.

“2020 has been a trying year for everyone,” Joiner wrote at the time he announced his transfer from Arizona. “As a team we have endured many challenges both on and off the field, but I couldn’t be more proud to have played for my hometown of Tucson, for the University of Arizona, in front of my supporters, friends, fans, and the Wildcat family. I would like to thank all my teammates for the memories, brotherhood, and camaraderie; Coach Rodriguez and staff for the offer and opportunity; and Coach Sumlin and staff for their guidance, lessons, and the experiences.

“First and foremost, I want to thank God and my family for always being with me through hard times and struggles, and the Tucson community for your outstanding support and motivation. I am Tucson born and raised and will always represent Tucson, Arizona, but after prayer and talking with my family, I will be entering the Transfer Portal. Recruitment is open to all! Thank You and BearDown.”

Joiner signed with Arizona out of Cienega High School in Tucson, Arizona. The Wildcats signed Joiner in the class of 2018 as a three-star quarterback. Joiner was ranked as the 584th overall player in the country, the 18th-best dual-threat quarterback and the sixth-best player in the state of Arizona.

The 6-foot-1, 214-pounder saw limited action in two contests as a true freshman in 2018, but preserved his redshirt while serving as the No. 3 quarterback. Joiner completed three of his four passing attempts for 17 yards, while rushing for fives yards on five attempts.

Joiner made the move to wide receiver in 2019 as a redshirt freshman and proceeded to lead the Wildcats in receiving. He made the transition from quarterback to receiver right before fall camp and appeared in all 12 games with three starts. Joiner finished the season as the team-leader in receiving yards with 552, third on the team with 34 catches and a team-high five receiving touchdowns.

Tennessee received good news at the wide receiver position on Monday morning when senior Velus Jones Jr. announced that he would be returning for another season. The Vols currently have eight scholarship receivers. They signed two receivers during the early signing period.