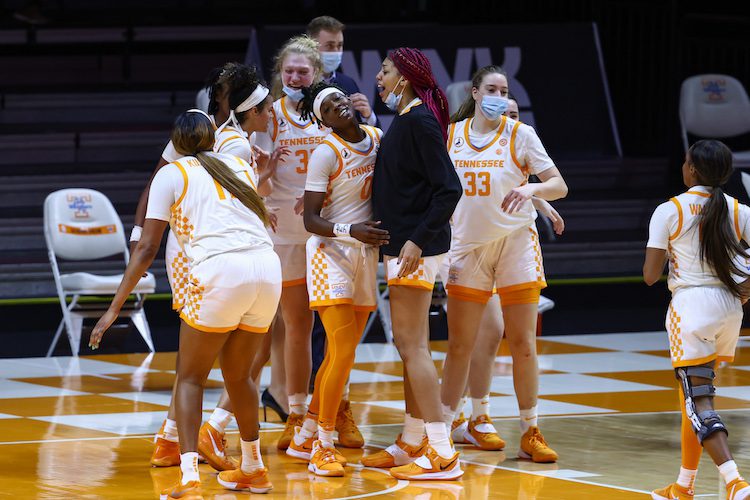 The Lady Vols are ranked in the AP Top 25 poll for the first time all season and have now appeared in the rankings every season since the AP Poll began in 1976-77. Tennessee debuted in the rankings on Monday afternoon at No. 23.

The Lady Vols are back in the AP Poll courtesy of a dominating 88-73 win over then-ranked No. 13 Arkansas to begin conference play. Senior forward Rennia Davis and sophomore guard Rae Burrell each scored 26 points apiece to lead UT to the upset victory. It was Tennessee’s first game back from the program being shutdown due to COVID-19.

Kellie Harper’s squad followed up the win over the Razorbacks with a 64-63 win over LSU in Baton Rouge on Sunday afternoon. It was Tennessee’s first win in Baton Rouge in its last four trips, as well as Harper’s first career victory in the venue as a head coach or player.

Burrell led Tennessee with 18 points and three rebounds against the Tigers. Sophomore Tamari Key turned in a season-high 12 points and six rebounds, while sophomore Jordan Horston chipped in 11 points.

The Lady Vols now turn their attention to a home game against Georgia (10-1, 2-1 SEC) on Thursday night inside of Thompson-Boling Arena. Tipoff is scheduled for 6:30 p.m. ET on the SEC Network. They’ll then travel to Alabama (10-1, 3-1 SEC) on Sunday afternoon for a 3 p.m. tip.

Tennessee will then take a break from conference play and welcome No. 4 Connecticut (7-0) to Knoxville on Thursday, Jan. 21 at 7 p.m. ET on either ESPN or ESPN2. The game will be the Lady Vols’ annual ‘We Back Pat’ game.