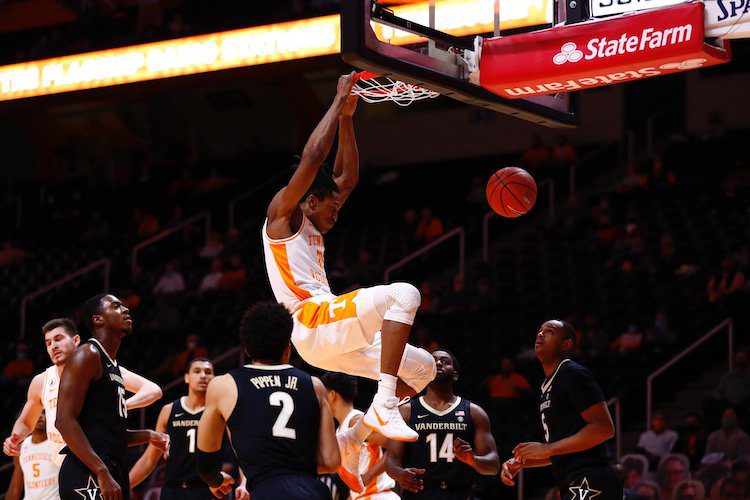 No. 10 Tennessee defeated Vanderbilt 81-61 inside of Thompson-Boling Arena on Saturday night to win the 200th meeting between the two schools. The Vols have now won four straight after losing to Alabama, their first loss of the season, two weeks ago.

“All that means is I’ve had a lot of good players,” Barnes said after the game. “Some great players, obviously. Great coaches with me. Been at some great universities where they’ve allowed us to build the kind of programs we want to build.

True freshman guard Keon Jonson led Tennessee (10-1, 4-1 SEC) in scoring against the Commodores as he was one of four Vols to score double-figures. Johnson had a career-high 16 points on 4-of-8 shooting to go along with three rebounds, three assists and one steal.

Johnson’s biggest impact came on the defensive end of the floor. The former five-star led the effort in slowing down Vanderbilt (4-6, 0-4 SEC) star guard Scotty Pippen Jr. The Vols held the SEC’s second-leading scorer entering Saturday’s game to 5-of-12 shooting from the field while forcing six turnovers as Pippen fouled out with 4:25 remaining.

“We knew that he had to really do a good job on Scotty Pippen Jr,” Barnes said. “I think (Keon Johnson) was really good.”

Pippen struggled to get going in the first half. Tennessee held him to five points on 1-of-6 shooting to go along with three turnovers.

Vanderbilt led for a small chunk of the first half despite Pippen’s struggle. The Vols began the game on a 7-0 run, but the Commodores responded with a 7-2 run and 12-3 run, respectively, to take a 21-18 lead with 7:15 remaining in the first half.

Tennessee responded with a 19-3 run to end the half and take a 34-24 lead into the locker room. The Vols shot 43% from the field over the course of the first 20 minutes while holding the Commodores to 31% shooting. John Fulkerson had a team-high 10 points at the break.

“The first half I thought we did a nice job,” Barnes said of defending Pippen. “The second half, not so much. We talked about it at halftime. He was going to come out and continue to get even more aggressive.”

Vandy out-scored UT 11-7 to begin the second half as Pippen began to find a rhythm from the floor, scoring five points right out of the gate to match his first half total.

Victor Bailey Jr. matched Pippen, heating up from the three-point line. The Vols’ junior guard hit three consecutive three’s to spark a barrage in which Johnson and Jaden Springer capped with three’s of their own.

Tennessee led 56-39 with 11:21 remaining following the five made three’s in a row. The Commodores would manage to cut the lead down to 11 before the Vols turned up the heat and finished out the game on an 18-9 run.

The Vols now turn their attention to the Florida Gators (6-4, 3-3 SEC). They’ll travel to Gainesville on Tuesday night for a 7 p.m. tip before welcoming No. 17 Missouri (8-2, 2-2 SEC) to Thompson-Boling next Saturday night.