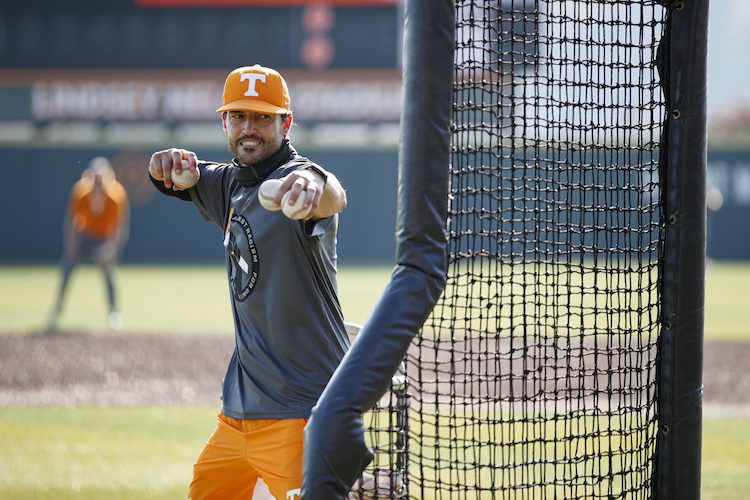 Tennessee head baseball coach Tony Vitello sat down with Rocky Top Insider to discuss the current state of his program as he enters year four on the job. Here’s everything Vitello had to say about his program and the upcoming season that begins next Friday.

On if he is surprised that he’s already in year four of his tenure at Tennessee:

“It’s year four if you’re going to count last year. Really only been about three and a half years living in Knoxville. So it’s four with an asterisk.”

On how he would assess the current state of the Tennessee baseball program:

“Trending up. The thing I’ve always tried to preach since I got into coaching is be on a never-ending incline of improvement. The goal is if you were to create a graph, to have an incline on that graph of improvement in all areas. Whether it be the facility or the roster or the coaching staff. That’s the way things are going right now. They could always be better. I certainly don’t think we’ve taken a step in the wrong direction. It’s nice we’re trending up, but we’re a long, long way from where we want to be.”

On where he thought his program would be entering year four of his tenure:

“I think what we considered first is ‘let’s win right away.’ That’s how we were fortunate enough to come upon recruiting Garrett Crochet. We might have hurt ourselves to be as good as we could be in the year’s following, but in year one, we wanted to be competitive right away. We didn’t do as well as we wanted, but it helped motivate us and fuel us for future years. That really was the approach we had in mind.

“Now you’re crazy if you don’t at least look at the big picture and don’t have some sort of vision of what you want things to be. It’s reflected in the schedule-making. You make the schedule maybe two, three, four years out in advance. We thought this would be a year we could no longer use being ‘new’ as an excuse. We should have enough left-handed pitching or experience, all things that fall under the umbrella of what Tennessee baseball should be at the point to where we can start our season on the road and go play a great program and see what we’re all about. The words I’ve used to our guys is that ‘if you wanna be good, you have to win games. If you want to be great, you have to win games on the road.’ At the very least we thought our culture would be in place to go on the road to start the year.”

On if there is a motto the team is going by this season:

“Not necessarily by this year or any year. We still have blank walls around here. They’ve got a clean look to them, but we still have walls you can put things up on. I’m not big on putting things up unless they come up organically for this program in particular and it’s competitive and guys jump on board with it. One thing that’s on the wall is ‘I’ll give my all for Tennessee,’ but it needs to be something as deep-rooted as that for us to do it.

“I do make comments all the time, use phrases like ‘unfinished business,’ or ‘pick up where we left off,’ or ‘should have an edge to us,’ because of last year. The guys sensed it, they thought it. When it was over, it was easy to brag, we could have been great, we could have done this. All things that bridge the end of last year to start of this year is where any of those catchphrases would come from, but we haven’t settled on one thing.”

On the expectations of the 2021 season:

“I’m taking the easy way out, but it’s true. It’s ‘just compete.’ Somebody may drop us for a Tuesday game and we may have to play on a Wednesday on the road when we’re not expecting to. Our Saturday starter may be in contact tracing and a guy that is usually in the bullpen now has to start. The drum has been beaten to death as fas as how this virus has hampered athletics. We have to work around all that.

“The expectation is to seek out competition. If you’re competitive and constantly seeking out competition, at least you’re putting yourself in a position to be a postseason contender and a threat, and maybe make a climb. For now, it’s all about what’s in front of you. Everyone wants to pass their test and get on that bus — there will be two busses — on Thursday. What’s to come after that could be anybody’s guess.”

On the potential of playing downtown if the Tennessee Smokies relocate to Knoxville and build a new stadium:

“I live in Old City so bring it on. Get that property value up for one thing, but I’m also not a cooker, so the more restaurants the better down in that area. Not only would it be really cool in that part of the city, but for all of Knoxville. It would really add to an already great city that has made a lot of improvements in a short amount of time since I’ve been here. There’s been a lot that has changed for the better and that would be one thing relative to the community.

“Now more specific to how it would bridge our program and their’s, I think it’s great for baseball. It would bring more baseball fans to the center of the city. It would educate people more just because there’s more young kids coming to one of our games, or one of their’s, or both. It can only help us. We never want to lose ownership of having our own facility. We’ve put so much time into this place and there’s a construction project on the horizon. We wouldn’t want to diminish or walk away from all that has gone on. Plus, you want your own field. But we would be crazy to not play in that park if it looks anything like its drawings. We would want to pick some games up whether its a preseason tournament, or some midweek games, or an in-state rivalry game over there. I’ve always wanted to play a wood bat game with throwback uniforms from the Rod Delmonico era. You could really do some fun things to have that marriage between their organization and our program.”

“Great. My world has been moving pretty fast because you’re always cramming for the season. We’re just trying to get as much done as possible. I literally ran from practice in my practice uniform over there and met with him briefly. Then he met with a whole group of coaches. Energetic, very down-to-earth, experienced. I was fortunate to be around coaching my entire life. If I’m any good at what I do, I think those characteristics are part of it. There’s a lineage in his family where everyone is super familiar with everything that goes hand in hand with college athletics. You could sense that from just the way he talked. Not from just the way his resume reads. All positive.

“The other thing is, baseball is a big deal now in college athletics, but you’re lying if you say every school cares about it. So you’re always on your toes as to if the administration is going to make baseball a point of emphasis or treat all points equally. We got that from Coach (Phillip) Fulmer and I think we’re going to get that from Danny White. His family already toured the facility and they’re avid baseball fans.”

On if he has had any conversations yet with Danny White about continuing to improve the program’s facilities:

“Step one was hire a football coach and they got that done swiftly. We haven’t gotten to that point yet, but it was more of a simple recognition that our facility needs to catch up with others in the league. There’s things going on literally right now that are helping us get there. But what about a seven or eight million dollar project? There are donors that have stepped forward. Danny (White) is a fan of baseball and comes from a very successful baseball program at Central Florida that he helped out. I think all the right pieces of the puzzle are there to make it happen, but we’ve got to win some games. If the program is having success and people are excited about it, it’s going to make those things happen quicker, and also make the whole vision come together. Not just part of it.”

On how Tennessee will go about replacing Garrett Crochet, who was a first round pick in the 2020 MLB Draft by the Chicago White Sox:

“He only threw three innings for us last year and we got off to a really good start. I think the group of guys that are here and a few of the incomers put us in a better position for non-conference than we were. I don’t know that we’ve got an answer to replace Garrett, but we’ve got time for someone to step forward in that spot. And we’ve got candidates.

“Blake Tidwell is a freshman that ended up on campus because he wanted to prove to everybody that he was a first rounder. And Jason Rackers was on last year’s roster, but he suffered an arm injury in junior college. Those two guys are both starter candidates. Not the only two candidates, but I think the fact that there are some and there’s time to build towards SEC play, that we’ll have those innings filled because there’s not going to be a replacement for a guy like Garrett.”

On Tennessee being picked to finish third in the SEC East:

“Didn’t know it until you told me. That’s a valid question for your position, but it shows you how much I care about it, but I honestly didn’t even know. I think John Wilkerson thinks I’m messing with him when he rattles off stuff like that and I didn’t even know.

“Where you want to be is kind of like where Tennessee basketball is, where you are consistently considered to be a contender to make a deep run in the postseason and that puts a target on your back. That can be uncomfortable because the standards are high and the pressure is there, all that good stuff, but ultimately, when we’ve gotten to that spot we’ll appreciate being picked or ranked highly.”

On beginning the season on the road at Georgia Southern next week with a three-game series:

“Scheduling is very difficult. We always want to go on the road at least once. Typically it’s the tournament we’ll go to that’s a real fun trip. Next year, we’ll be in Houston, the next year the Texas Rangers, the next year Tempe, Arizona. But this was a relatively close opponent that we have a lot of respect for. We knew we would be challenged right out of the gate. They’ll return the trip by coming here next year. We basically want to go down there and find out what’s what. We might get a really strong dose of humble pie, we might rack up some big time wins that can help us out with the RPI. The bottom line is we wanted to challenge our guys.”