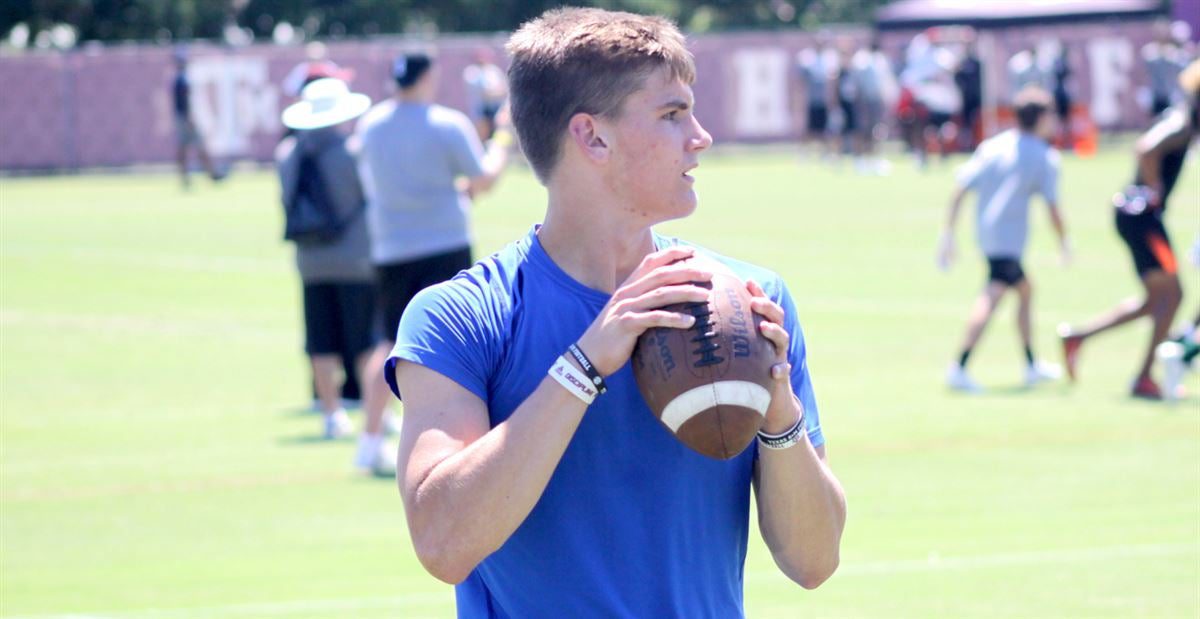 Coveted four-star quarterback Ty Simpson out of Martin, Tennessee is set to announce his collegiate decision next Friday, Feb. 19, on CBS Sports HQ during a ceremony at his school that’s scheduled to start at 3 p.m. ET.

Simpson went on 104.5 The Zone’s 3HL with Brent Doughtery and Dawn Davenport in Nashville to preview his upcoming decision. Simpson discussed his interest in his top schools, getting to know Josh Heupel, what he’s looking for in a school and much more here. Here’s everything Simpson had to say:

On why he is making his decision next Friday, Feb. 12:

“So my dad is the head football coach here at the University of Tennessee at Martin. His season got pushed to the spring this year and starts the 21st. Family is real big to me. For them to be able to come see me make my college decision and for us all to be there would be an awesome feeling and an awesome time.”

On the schools he’s considering in his decision:

“Alabama, Clemson, Tennessee, Texas A&M, Ole Miss and Texas are a big part of my recruitment right now just because of the SEC and getting the best out of me and my abilities, the coaching staff and the relationships. Those are my top schools. I’m just praying to God that I have (six) schools that if I came there, I would have a heck of a time if I went there.”

On the most important thing to him in making his decision:

On his interest in Texas A&M:

“A&M is a great place and Jimbo has a great track record with some of his development. Jameis Winston, Kellen Mond. He’s a football junkie and a quarterback guru. I feel if I went down there and I got in his offense, and do what I do, throwing the football for my dad, I feel like I can go to the next level if I decide to play for him because I know I would be taken care of by Jimbo. I would have a PhD in football because I would know so much ball.”

On the best part of his game:

“The best part of my game would be my off platform throws and my escape ability. I’m a baseball guy. I thought I would actually play baseball in college instead of football. That was my first love. Growing up I always thought it would be cool to play college baseball at Ole Miss or Mississippi State, where my Dad played. Being able to throw sidearm like (Patrick) Mahomes is really cool. My athletic ability, being able to escape from pressure, I think that’s a big part of quarterbacks evolving right now. Being able to escape and make plays on the run.”

On what it’s been like to be recruited by Ole Miss head coach Lane Kiffin:

On if his interest in Texas is because of his relationship with Steve Sarkisian:

“Definitely. Coach Sark has been recruiting me for a long time, since my freshman year. Seeing what he did at Alabama the last two years with Tua (Tagovailoa) and then Mac (Jones) this year, a future first round draft pick, who wouldn’t want to go play for that and be the first (quarterback) he signs at Texas. It would be a blessing to go play for the most well-known brand in college football. Playing for the Texas Longhorns would be a blessing.”

On developing a relationship with new Alabama offensive coordinator Bill O’Brien and his interest in the Crimson Tide:

“Coach O’Brien is an NFL guy, coached Deshaun Watson, coached Tom (Brady), so when you google his name, your eyes light up. You’re like ‘holy cow, this dude.’ I could be coached by him and it would be a great experience. If you go to the University of Alabama, you go for the program and Coach Saban. You don’t go for your offensive coordinator and quarterbacks coach because there’s a lot of turnover there. And I know that going in and I also know a lot of good players are going there also.”

On his interest in Tennessee:

“One thing about it is the fans. I love Tennessee fans because they’re passionate. They always have Tennessee’s back regardless of if they go 0-12 or 12-0. They’re always going to be there next year. I love the University of Tennessee and I just got off the phone with Coach (Josh) Heupel before I jumped on here. Getting to know those guys — as soon as he got the job, he called me and introduced himself and said, ‘Look, Ty. I know I’m not Coach Pruitt but I’m going to recruit you.’ Going through his quarterback development with Drew Lock, Dillon Gabriel and McKenzie Milton there at UCF, I could definitely see myself going (to Tennessee). It was really cool to see him say they’re going to close down the borders here in the state of Tennessee because these ’22 guys here are the real deal and we’re really, really close. We’ve known each other since middle school and elementary school, so being able to play with those guys at the same college would be awesome. Getting to play for our state university, you couldn’t ask for anything better.”

On how many times he’s spoken with Josh Heupel since he got the Tennessee job:

“Goodness, at least 20 times. It’s funny because during this time of the season, you don’t play basketball, you’re in the middle of football workouts and baseball workouts, so he always calls me at night and says, ‘Hey, Ty. What are you doing? Well, coach, I’m playing video games.'”

On if he has studied Heupel’s offense and what he thinks about it:

“Yes, as soon as he got the job, that was the first thing I asked him. I wanted to know what his team was and what his philosophy was. I think what he does is he spreads the field out so much. And it gives the quarterback so much space to do what he does. They’re very creative in what they do. I kind of compared him to Ole Miss this year. That’s what their offense is going to be like, explosive just like Ole Miss’ offense. They’re going to be very creative in what they do because they spread the field so much with those big splits. They’re going to get some guys like Jalin Hyatt and Malachi Wideman, and all those new wide receivers who were freshmen last year and they’re going to be good.”

On if he’s back in a spot with Tennessee where he was with Jeremy Pruitt after speaking with Josh Heupel many times over the last two weeks, or is he still trying to build that trust back:

“I’ve always loved Tennessee because of the University. Of course, Coach Pruitt, Coach Weinke and Coach Chaney were one of my first offers. I can’t thank them enough for how much of a big part of my recruitment they’ve been. You also have to think, you’re going to a university to play for that university. You’re not going to play for a coach, nothing like that, even though a lot of guys do that. I don’t go into it that way. So, I would say that I’m back to trusting Tennessee. I never lost trust in them, but I just know that me and Coach Heupel and Coach Golesh and all those guys, if I go there, I feel like I would have an awesome relationship with them and just have fun. That’s what the players there are telling me now. JT Carver, Cooper Mays, all those guys who are there now are telling me, ‘Ty, it is fun here. We’re going to win games because we care about each other and we’re all in it together.’ That’s what I like to see in a program.”

On if Tennessee has lost ground during the coaching transition?

On if he has been able to speak with Trevor Lawrence about what life at Clemson would be like:

“Kind of. He actually called me one time. It was a Georgia number and I thought it was a spam call, but all of a sudden it was ‘Hey Ty, it’s Trevor Lawrence,’ and I was like ‘holy crap, I’m talking to the future No. 1 overall pick.’ It was really cool. I asked him ‘Why did he go to Clemson’ and “Why didn’t you stay in the SEC?’ and ‘How was your walk with Christ there?’ I told him I appreciate what he does from his platform showing kids like my brother, who is a diehard Clemson fan, how a quarterback should act. I just appreciate him and he gave me some good advice. Some things I didn’t realize, so it was cool to talk to him.”

On his younger brother being a Clemson fan:

“He was probably six years old and I was probably in sixth grade. I don’t know how it started, but Graham is just a diehard Clemson fan. He has a Trevor Lawrence jersey — now don’t him fool you. He has Tennessee, Ole Miss, Alabama — he’s got a bunch of stuff like that, too. But when it comes to everybody else, he likes some Clemson.”

On if he is getting anxious to get his announcement over with:

“I really enjoy the process. I want to coach when I’m older, so being able to talk to all of these guys and learn football. You know, one day, maybe being able to say, ‘I recruited that dude and I’m going to hire him to be my quarterback coach or offensive coordinator.’ I really enjoy that process and getting to know new people. I’m a very social guy and I’ll talk to a brick wall if I need to, so I’ve enjoyed that part of it.”

On if there was any pressure to play for his dad at Tennessee-Martin:

“I would love to do that, but y’all may have to get him on the phone because he’ll say something like ‘he doesn’t even clean his room, he can’t play for me.'”

On what it’s like to have a dad who is a football coach:

“It’s really funny. At dinner time, we always do talk football. Here in Tennessee, football is big, so any big football game our family friends will get together. Well, the Simpson’s always get invited, but we don’t always go because Jason Simpson likes to hold the remote, rewind it, and stuff. It’ll take us three hours to watch a game. And when he’s in season, he’ll have a game at night and come back from a long road trip, and if anybody tells him the score, you’ve done poked the bear. He’ll be devastated on the ride back. He won’t talk to you. It’s real cool sitting there talking about football at dinner because I’ve learned so much from him. I probably wouldn’t be here if it wasn’t for him so I thank him and my mom everyday for what they do, and my brother and sister for the sacrifice they make and put up with so I can achieve my dream.”