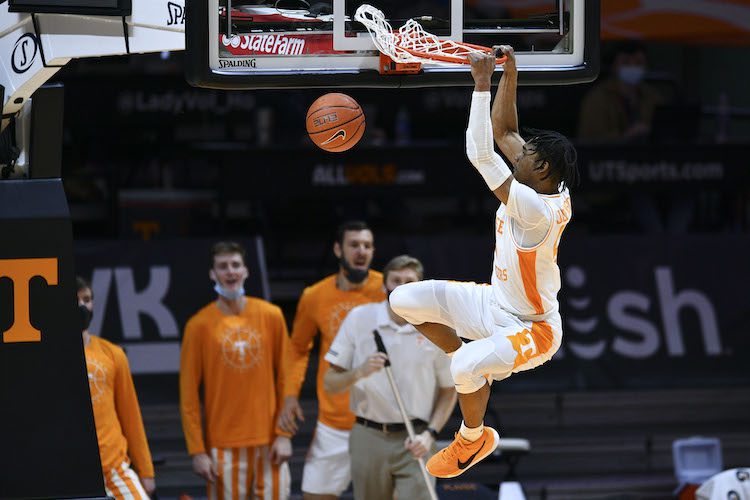 Tennessee was the only team with two freshman on the SEC’s All-Freshman Team. Springer (12.7 points) and Johnson (12.1 points) were the Vols’ two leading-scorers during conference play as they grew into a big role within the team.

Springer also led the Vols in assists (3.3 assists), as he shot 46.3% from the field, 40.0% from 3-point range and 80.0% from the free throw line. He had five 20-point games against SEC opponents, highlighted by a season-high 30-point performance in the win over Georgia.

Johnson’s 2.6 assists per game ranked second behind Springer during SEC play. He tallied 15 steals and shot 45.3% from the field. Johnson also led the Vols in charges drawn (11) and diving efforts (13), according to Tennessee. He scored a season-high 27 points against Kentucky earlier this year to lead the Vols to a comeback win over the Wildcats in Rupp Arena.

Pons led the Vols in blocks during the regular season with 36 and ranked fourth in the SEC with 1.8 blocks per game during league play this season. His 126 career blocks rank 10th all-time in program history. Pons also logged a career-high 16 steals while ranking second on the team with nine charges drawn.

Pons joins current Dallas Mavericks starter Josh Richardson as the only Vols ever to earn multiple selections to the SEC All-Defensive Team. Richardson earned the honor in 2014 and 2015.

Tennessee finished the regular season 17-7 and 10-7 in league play after beating Florida 65-54 on senior day this past Sunday. The Vols will now head to Nashville and await their opponent on Friday of the SEC Tournament after securing a double-bye with their win over the Gators. They’ll either play Florida, Vanderbilt or Texas A&M at 2:30 p.m. ET on ESPN.