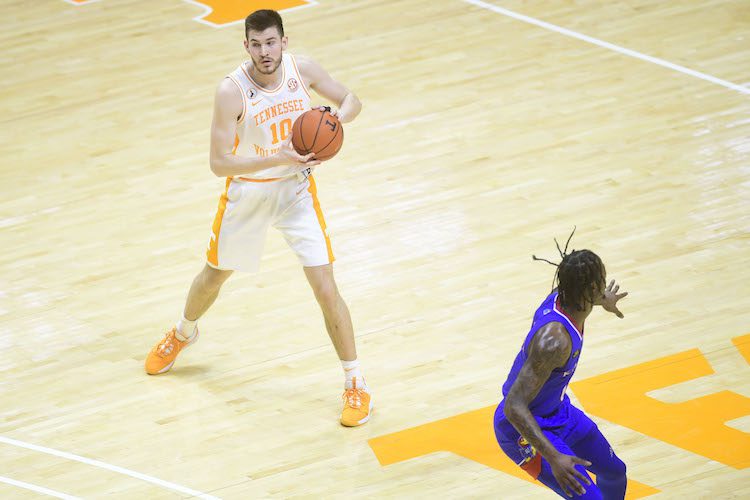 As Tennessee has been locked into the bubble in Indianapolis for the past three days, all eyes have been on John Fulkerson and his recovery.

On Wednesday afternoon, Rick Barnes met with the media to discuss the upcoming matchup with Oregon State. Barnes was asked about Fulkerson, who he said was still “day-to-day” with his injury. A positive note to come out of Indianapolis was Fulkerson working on his cardio, while the rest of the team was practicing. I know it sounds small, but any kind of work Fulkerson can get in right now is a positive.

Josiah-Jordan James was asked about Fulkerson and how they’ve tried to keep his spirits up through all of this.

“We’re his brothers,” James said. “We don’t want him to do anything he’s not capable of. We joke with him about his black eye, I think it’s a good look for him.”

“We’re in his corner. He’s our guy. He’s our leader. We have his back at all times. We’re just happy he’s with us on this trip.”

This past Sunday night, as Barnes was addressing the media regarding the NCAA Tournament selection, as the first update was provided on Fulkerson. A Tennessee spokesman said that Fulkerson flew back to Knoxville on Sunday morning with trainer Chad Newman for a procedure that was related to the facial fracture he sustained. It was also announced that Fulkerson would arrive back in Nashville on Sunday night, so he could travel with his team to Indianapolis.

The status for Fulkerson in regards to the NCAA Tournament has yet to be determined, as he also suffered a concussion during the incident on Friday. Tennessee officials said that Fulkerson would be evaluated daily, but gave no timeline for a recovery, so he’s still day-to-day.

“He’s been great, you can only imagine how much he wants to be out there, if he could, he would,” Barnes said. “He’ll be back tonight and bus with us tomorrow morning. It’s never about him, I’ve said it before that it’s never gonna be about John Fulkerson. He wants his teammates to win and wants to be a part of it. Believe me, nobody is pulling for him to do that more than his teammates, because they love him and want to see him have a chance to be successful because they know how hard he’s worked over his time here”.

One thing is for sure regarding Fulkerson, it’s better to be day-to-day, then be ruled completely out. The more Tennessee wins, the more time it gives Fulkerson to heal. Let’s not act like his teammates don’t know that as well.