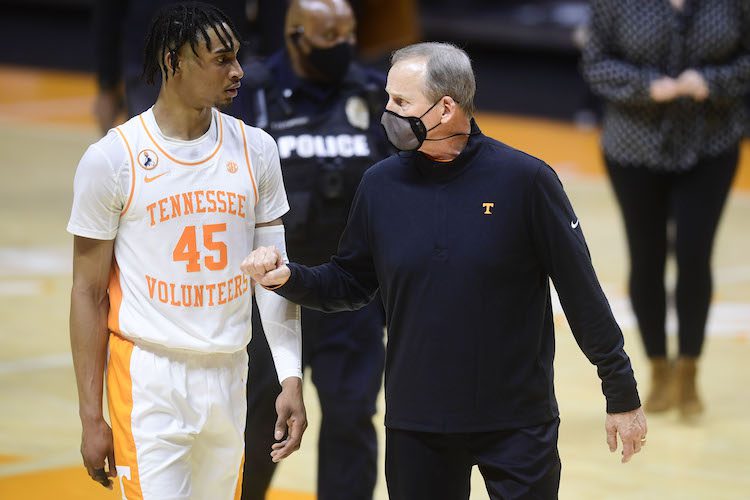 In the midst of Tennessee’s embarrassing 70-56 loss to 12-seed Oregon State on Friday afternoon in the opening round of the NCAA Tournament, reality set in that it could very well be the last time we see Keon Johnson and Jaden Springer in a Tennessee uniform.

The pair of talented freshman guards are highly-touted prospects and likely first round draft picks in this summer’s 2021 NBA Draft. In ESPN’s latest NBA prospect rankings, Johnson is ranked as the No. 6 overall prospect. Springer is ranked as the No. 27 overall prospect. Now that Tennessee’s season has come to an end, it’s time for the former five-star high school prospects to make a decision as to whether they’ll enter the NBA Draft early.

“I would expect that they’ll do what everybody does now,” Vols head basketball coach Rick Barnes said following the loss to the Beavers. “They’ll go through the process. That’s what they need to do. And they’ll go from there. Obviously in the meantime we’ll plan on doing what we have to do for our roster next year.”

He ranked seventh in assists per game in league play with 3.4 assists (47 total), while ranking 10th in SEC league play in assist-to-turnover ratio with a mark of 1.1 (47 assists vs. 41 turnovers). Springer finished SEC play ranked 10th in free-throw percentage, shooting an efficient 80.4% from the line (74-of-92).

Springer scored a season-high 30 points on an efficient 9-of-11 shooting from the field in a win over Georgia in February. He pulled in four rebounds, dished out two assists, and tied his season-high with three steals. The game prior, he scored a then season-high 23 points on 9-of-17 shooting in a comeback win over Kentucky in Rupp Arena. Springer also had five rebounds, blocked two shots and tallied a steal.

Johnson joined Springer on the coaches’ SEC All-Freshman Team, as Tennessee was the only team with multiple selections. The Shelbyville, Tennessee native averaged 11.3 points and 3.5 rebounds on 44.9% shooting from the field this season. Johnson led the team in charges drawn (11) and floor burns/diving efforts (14).

In Tennessee’s two SEC Tournament games in Nashville, Johnson played 66 of the team’s 80 minutes and totaled 33 points (16.5 ppg), 18 rebounds (9.0 ppg), seven assists (3.5 apg) and three steals (1.5 spg). Johnson put together a stellar performance in the Vols’ victory at Kentucky, scoring a season-high 27 points (17 of which came in the second half) on 9-of-16 shooting, while knocking down 9-of-11 attempts from the foul line, pulling in four rebounds, dishing out three assists and adding one block and a steal.