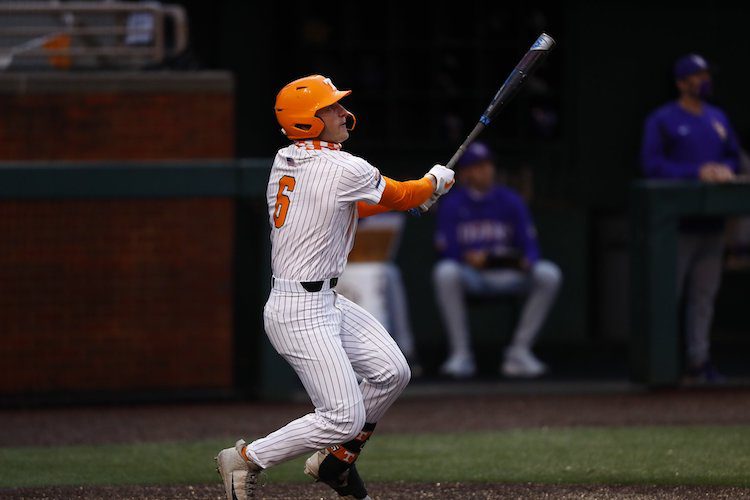 Vols centerfield Drew Gilbert delivered the game-tying and game-winning hit to lift No. 9 Tennessee over No. 14 LSU 9-8 in 11 innings on Sunday. Gilbert’s heroics resulted in a series win for the Vols and the first time the program has won back-to-back series to begin SEC play since 2001.

Tennessee (20-4, 4-1 SEC) trailed 8-7 in the top of the ninth inning on Saturday night when the game was suspended due to inclement weather. Game two of the series resumed on Sunday at 12:30 p.m. with Vols reliever Kirby Connell on the mound. Zach Arnold was at the plate for LSU (16-7, 1-4 SEC) with a 3-2 count and struck out. After giving up a single, Connell got a double play to get out of the inning and set up Gilbert’s first round of heroics.

“I didn’t have much to say this morning,” Vols head baseball coach Tony Vitello said following the game. “That inning was impressive, starting with Kirby’s strikeout. And then just the whole vibe they had going.”

With one out in the bottom of the ninth, Pete Derkay drew a walk to put the tying run on first. Christian Scott pinch-ran for Derkay and then advanced to second on a groundout. That’s when Gilbert stepped to the plate with two outs, and on an 0-2 count, lined a ball to right field for an RBI double to tie the game at 8-8 and send it to extra innings.

“First of all, I don’t think that run scores unless Jake Rucker doesn’t move him over to second to put him in scoring position,” Gilbert said. “And then to start that at-bat, I took a couple of swings that I had a little too much effort. Kind of lost my direction. Then fouled a couple pitches off and made an adjustment, loosened up and reacted to a fastball.”

Connell kept the game knotted over the next two innings with the help of senior RHP Sean Hunley. Connell pitched a scoreless 10th inning, though he had to work around a two-out double.

In the 11th, Connell ran into trouble once again when he hit a batter with one out. After LSU advanced the runner to second on a bunt, Hunley came in and walked the first batter he saw. Hunley (W, 3-0) then picked up a strikeout to get the Vols out of the jam and strand Tigers on first and second.

“It’s pure confidence and has a little bit to do with the mustache he’s got going on,” Hunley said of Connell’s performance. “He’s throwing everything for strikes right now with a lot of confidence. He’s able to mix pitches really well and I’m happy to see him succeed.”

Hunley getting out of the inning set up Gilbert’s second round of heroics. Gilbert stepped to the plate in the bottom of the 11th and with one out on 1-1 count, hit a line drive home run to right field to end the game. It was Gilbert’s team-leading sixth home run.

“I tried to tune out all of my thoughts and let all of the work I’ve done show,” Gilbert said. “It’s just understanding that my teammates have my back and trusting all the work I’ve put in over the years. I feel like I’ve worked very hard to get where I am.”

Gilbert’s heroics would not have been possible without Tennessee left fielder Evan Russell’s effort on Saturday night before the game was suspended. Russell smashed three home runs in his first three at-bats to give Tennessee a 7-3 lead after six innings.

Russell’s first two home runs came while Tennessee was trailing. LSU first baseman Tre’ Morgan hit a home run in the top of the first before third baseman Cade Doughty singled in the third to extend the Tigers’ early lead to 2-0. That’s when Russell stepped to the plate in the bottom half of the third and smashed a two-run home run to left to tie the game.

LSU took back the lead in the fifth inning on an RBI groundout after Morgan doubled to lead off the inning and then advanced to third on a wild pitch. Morgan was a thorn in the side of Tennessee all game long. The freshman finished 5-for-6 at the plate with a home run, three doubles, three runs scored and two RBIs.

Russell continued to be a thorn in the side of LSU’s as well, as in the bottom half of the inning he hit his second two-run home run of the game to give Tennessee a 4-3 lead. The Vols would go on to tally two more runs in the frame to extend its lead to 6-3 thanks to Gilbert being hit by a pitch and Luc Lipcius walking, each with the bases loaded.

“I was seeing it well,” Russell said. “I was getting into some heater counts and I got some pitches to hit. I was relaxed in the box and my mentality was just to try and help the team win.

Russell hit his third home run an inning later to push the lead to 7-3. His three home runs tied the single-game Tennessee record for home runs in a game. Russell finished 3-for-5 with three runs scored and five RBIs.

“Proud and also a little relieved for Evan,” Vitello said. “Almost every day Evan does have the right approach. To see him get rewarded is awesome. It would have been really tough to follow when one of our kids has an effort like that in one day.”

LSU erased the four-run deficit by scoring a combined five runs in the seventh and eighth inning. Camden Sewell pitched the middle innings after coming in for starter Will Heflin in the fourth. Sewell surrendered three runs over the course of three innings, including the two that LSU scored in the seventh. Heflin lasted just 3.1 innings in his fifth start of the season, allowing two runs and a walk on six hits. He struck out six.

Tennessee closer Redmond Walsh relieved Sewell in the seventh to get the Vols out of a jam, but then ran into trouble himself in the eighth. LSU hit two homers off of Walsh, a solo homer and a two-run shot, to take an 8-7 leave just before the game was suspended.