It’s been a long time coming, but Tennessee is finally headed back to the NCAA Super Regionals. The Vols came into tonight’s rematch with Liberty, looking to take advantage of the Flames, who defeated Duke in the first game on Sunday.

As the Vols took the field in front of a packed house at Lindsey Nelson Stadium, Will Heflin took the mound as Tennessee’s starting pitcher. For Heflin, it was the kind of environment that he could only dream of, with an opportunity to send his Vols onto the next round, behind a raucous crowd.

For the Tennessee offense, it took a few innings to get things going, compared to previous nights. Jake Rucker drove in Max Ferguson in the 3rd inning, giving the Vols a 1-0 lead. A fired up Heflin took the mound, getting the crowd behind him, as he fought through a few tough innings, setting things up nice for the upcoming 5th.

In the bottom 5th, Drew Gilbert stepped up to the plate, with Max Ferguson already on base, after getting hit by a pitch. On Gilbert’s first pitch, he hit a bomb to right field, that cleared the scoreboard and definitely left a little damage to the Liberty bus. Tennessee led 3-0 and gave Heflin enough to get through the next few batters before Tony Vitello went to the bullpen. This was Gilbert’s third home run of the regional.

This was a special moment for Will Heflin, as he finished the night with 8 K’s, on 97 pitches, while only giving up one run. As Tony Vitello walked to the mound and signaled for the relief pitcher, you could feel the emotion in the crowd as Sean Hunley made his way from the bullpen. It was a special moment for Heflin and Hunley, who are best friends. According to Tony Vitello, that was the first time that Heflin had passed the ball off to his Hunley in relief. So, as Heflin was headed to the dugout, the sold out crowd rose to their feet and gave him a standing ovation, which was much deserved. 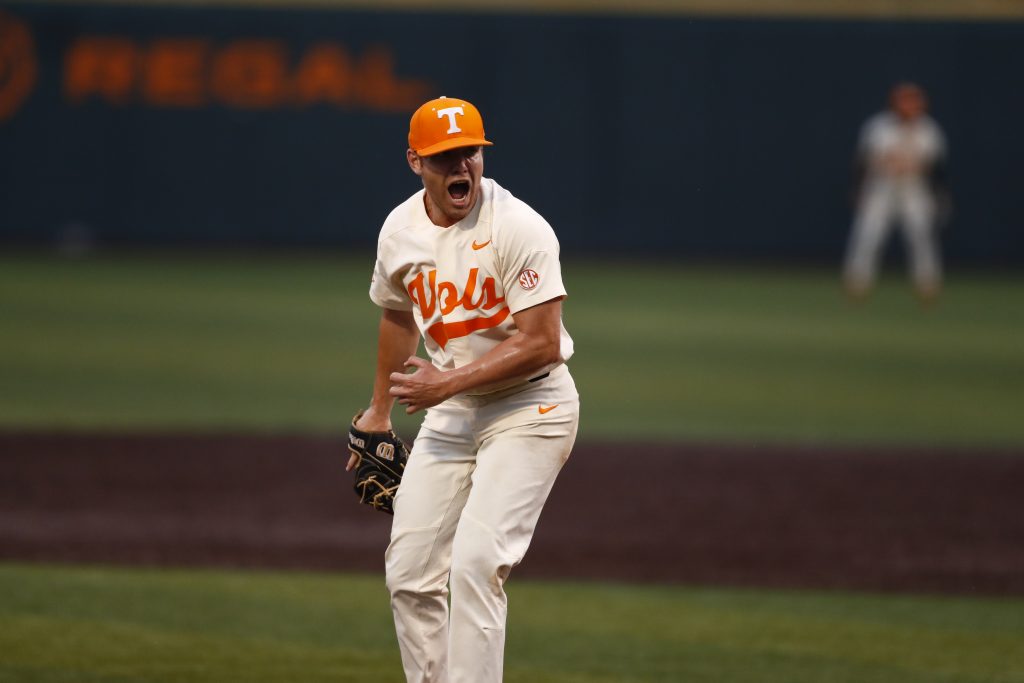 Even in the 6th inning, when Liberty had two runners on, Sean Hunley delivered for the Vols and got out of the inning without further damage. It was 3-1, but it felt like Tennessee was in control, in many different facets. As Tony Vitello mentioned postgame, the emotion was running high and the players were feeding off the crowd, as they headed to the final few innings.

This team likes to make things interesting, which they did by not recording a hit since the Gilbert homer, until the 7th inning. But for Tennessee tonight, three runs would be all they needed.

There were times where things got a little wacky, like Drew Gilbert not being able to see the ball in center field, but still coming up with the catch to prevent damage. This team seems to always find a way to get it done.

As the crowd rose to their feet in the ninth, noise pulsating throughout the stadium and around campus, Tennessee took the field, looking for three more outs. Sean Hunley, with the Vols dugout yelling his name, wasn’t going to let his teammates down. After getting the first batter to fly out and giving up a single on the next pitch, he settled down. After recording the 2nd out, it was down to one final batter. As over 4,200 fans clad in orange yelled at the top of their lungs, a pitch was hit to left field and Evan Russell ran in for the catch, to the jubilation of Lindsey Nelson Stadium. 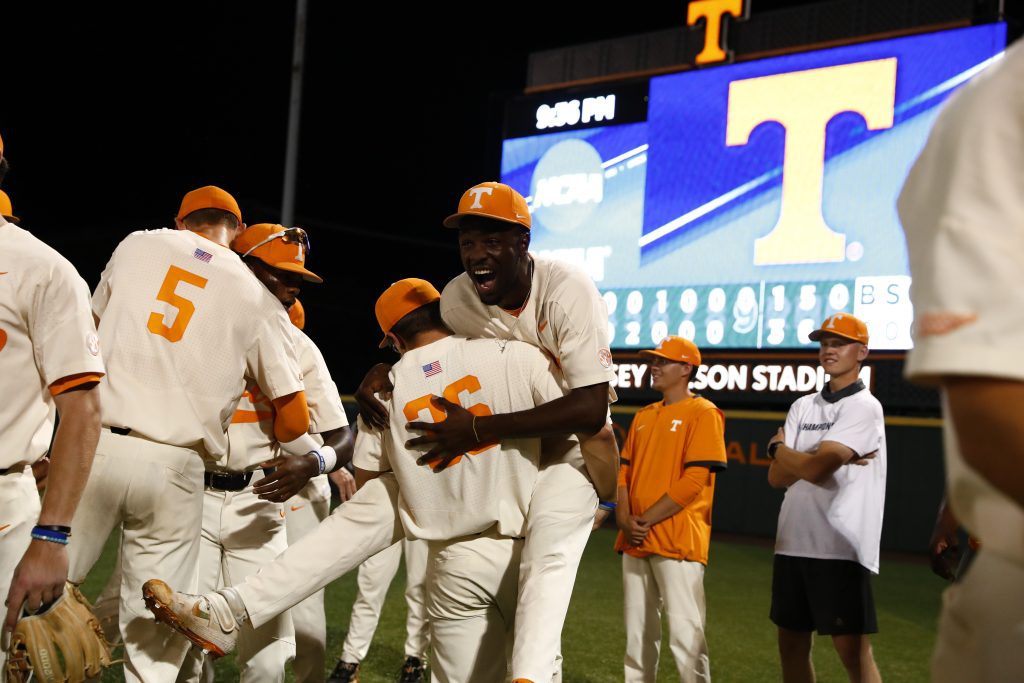 It was the “Group Of Death”, according to Tony Vitello, while recalling his soccer days growing up. After hearing all week how tough this regional was for his team and the pressure that went into this weekend, he was a little choked up postgame, while describing what this meant to his team and coaches.

The Vols were heading to the Super Regionals for the first time since 2005, breaking down the walls along the way. Thinking about how Tennessee has won some of these games this season, it definitely makes you wonder if this is a team of “destiny”. But to the fans and coaches who’ve watched this group all season, this is just a hard working group that never waves the white flag.

You can call it what you want, but what you’ve seen up to this point is pure grit. Next weekend, they’ll get a chance to break down a few more walls that have surrounded the program for over 15 years.

Tony Vitello had one more though postgame, when he brought up the fact that there were some empty gaps in the stadium that could be filled.

“I think there are gaps to fill next weekend. We could fill empty areas around the stadium.”

Get ready, the head coach wants more orange in the stands next weekend. I’d say they’ll find a way to make the coach happy and add a few more seats for the well deserved fans.

Another week of Tennessee baseball, as they continue their road to Omaha.