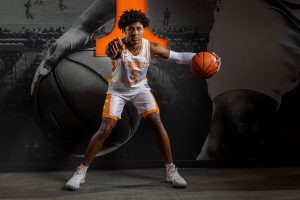 BJ Edwards Jr., a four-star point guard and a top target of the Tennessee basketball team is set to officially announce his collegiate commitment at 1:00 p.m. ET on Thursday, July 1, according to Stockrisers.

The fourth-ranked player in the state of Tennessee has been on the Volunteers’ radar for a long time now. Edwards, a local rising senior from Knoxville Catholic High School, has been making headlines in the city since he first stepped on the court.

On Tuesday, Edwards announced on Twitter that he had just wrapped up an official visit to Tennessee with fellow 2022 four-star target Dillon Mitchell.

Official visit to Tennessee was amazing! Vol nation how do I look ? 🧡🤍#notcommited pic.twitter.com/w2jhoQdJV4

In fact, Edwards took three official visits around the country. These schools included Tennessee, Florida, and Wake Forest, according to Stockrisers.

During his junior campaign at Knoxville Catholic, Edwards showed exactly why he is one of the best prospects to come out of Knoxville in a long time. The shifty point guard averaged 19.9 points per game, seven rebounds per game, and 5.1 assists per game during his 23 games in 2021.

Edwards, one of the top targets of the 2022 Tennessee basketball class, will announce his official commitment this Thursday at 1:00 p.m. ET as the Volunteers still look to find their first commitment to the class.