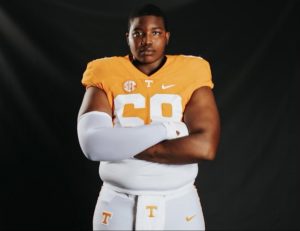 The Tennessee Volunteers football team added an offensive lineman to the 2022 class on Friday, as three-star OT Masai Reddick has officially announced his commitment to the University of Tennessee.

Reddick, a six-foot-four offensive tackle from Cass Technical high school, will be Tennessee’s eighth commitment to the class. It also comes one day after three-star defensive lineman Jordan Phillips also committed to Tennessee.

The Detroit, MI native chose Tennessee over 20 other schools that extended a scholarship offer to him. And for Reddick, the biggest factor in his decision came down to the culture that the Tennessee staff has installed.

“What stood out to me was that the coaching staff was all about the grind,” Reddick told Rocky Top Insider. “And working together as a family to be what coach Heupel would call ‘1-0’ every day.”

Reddick took two visits to Tennessee in June. He had a chance to meet some of the players and the coaching staff on Rocky Top during an unofficial visit that was followed by an official visit the following weekend.

He also mentioned OL Kingston Harris as one of the players that made an impact on him during his visit.

“Me and [Harris] really hit it off during my official visit,” Reddick said. “Talking about just life and family.”

Although, when asked to describe one specific coach he clicked with, Reddick couldn’t just choose just one.

“I couldn’t say because I’m super close with all of the coaches,” said Reddick.

By the time that Reddick arrives for his first season on campus, the training wheels should be off Josh Heupel’s Tennessee program. And as for Reddick, he believes that the continued chase of the team’s core values will carry them towards their goal as a team.

What are their goals, you ask? It boils down to two big things in the eyes of Reddick.

“Once I arrive on campus a goal I see is the team creating a winning attitude and a thirst for winning and dominating,” Reddick said. “And also becoming even more of a family in the process.”